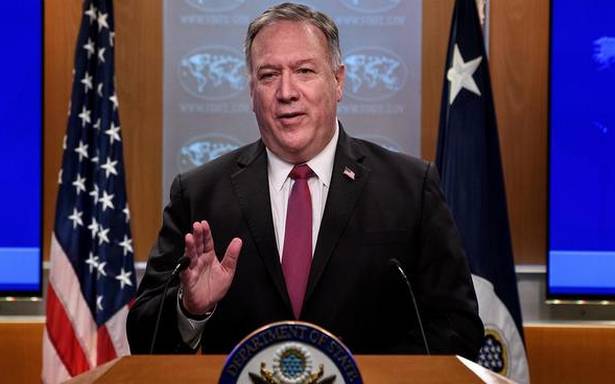 The issue of sanctions by the U.S. for purchase of Russian arms is of particular interest to New Delhi, which is also in the process of buying the S-400 from Moscow.

The U.S. has imposed sanctions on NATO-ally Turkey for its purchase of Russia’s S-400 missile defence system, U.S. Secretary of State Mike Pompeo announced on Monday. The issue of sanctions under Section 231 of the Countering America’s Adversaries Through Sanctions Act (CAATSA) for purchase of Russian arms is of particular interest to New Delhi, which is also in the process of buying the S-400 from Moscow.

“Today’s action sends a clear signal that the United States will fully implement CAATSA Section 231 and will not tolerate significant transactions with Russia’s defense and intelligence sectors,” Mr Pompeo said on Monday.

Sanctions were imposed on Turkey’s main defence procurement agency the Presidency of Defense Industries (SSB) for “knowingly engaging in a significant transaction with Rosoboronexport (ROE), Russia’s main arms export entity” the office of the US State Department spokesperson said in a statement.

These SSB sanctions comprise of a ban on granting specific U.S. export licenses and authorisations for any goods or technology, a ban on loans or credits by U.S. financial institutions totaling more than $10 million in any 12-month period,a ban on U.S. Export-Import Bank assistance for exports and mandated U.S. opposition to loans by international financial organisations to SSB.

Additionally, sanctions will include full blocking sanctions and visa restrictions on SSB president Ismail Demir and other officials.

“We very much regret that this has been necessary, and we very much hope that Turkey will work with us to resolve the S-400 problem as quickly as possible,” said the State Department’s Christopher Ford, who is in charge of security and non-proliferation.

“The United States made clear to Turkey at the highest levels and on numerous occasions that its purchase of the S-400 system would endanger the security of U.S. military technology and personnel and provide substantial funds to Russia’s defense sector, as well as Russian access to the Turkish armed forces and defense industry,” Mr. Pompeo said.

“Turkey nevertheless decided to move ahead with the procurement and testing of the S-400, despite the availability of alternative, NATO-interoperable systems to meet its defense requirements. This decision resulted in Turkey’s suspension and pending removal from the global F-35 Joint Strike Fighter partnership,” he said.

Last year the U.S. had removed Turkey from its F-35 jet program over concerns that sensitive information could be accessed by Russia if Turkey used Russian systems along with U.S. jets. U.S. President Donald Trump and Turkish President Recep Tayyip Erdoğan have an apparently close relationship and Mr. Trump has pushed back on Congressional demands for sanctions against Turkey. The administration has now had to face a $740 million National Defense Authorization Bill (NDAA) 2021 from the U.S. Congress, which mandates sanctions against Turkey within 30 days of the bill’s passage (December 11). Mr. Trump has threatened to veto the bill.

“The biggest winner of our new defense bill is China! I will veto!” Trump had tweeted days ago.