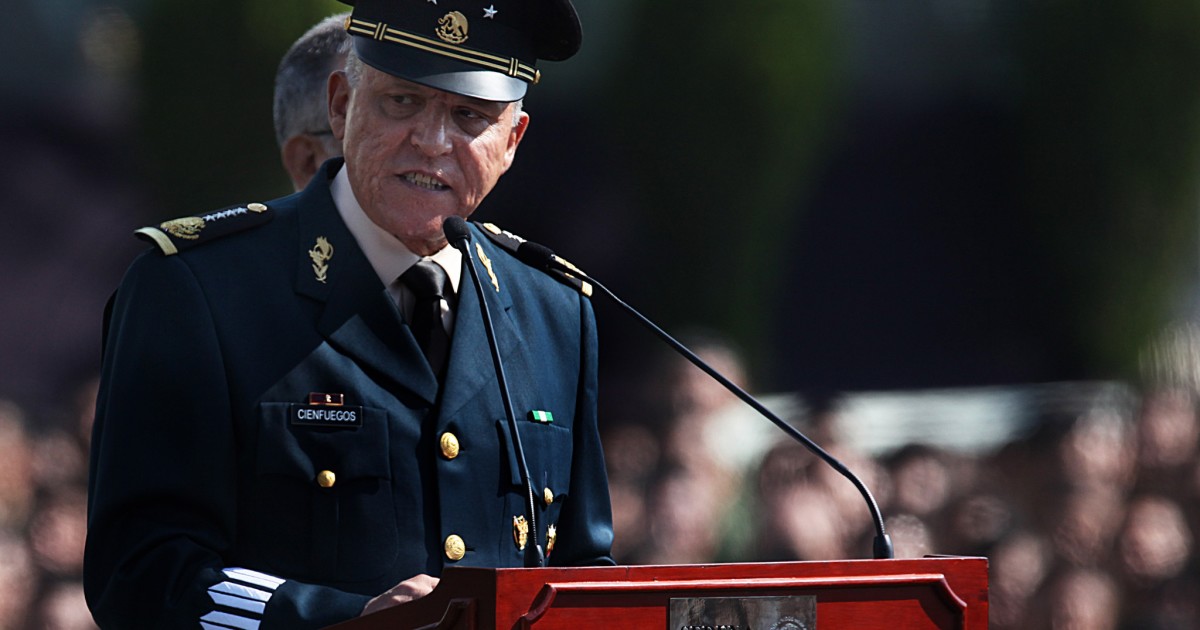 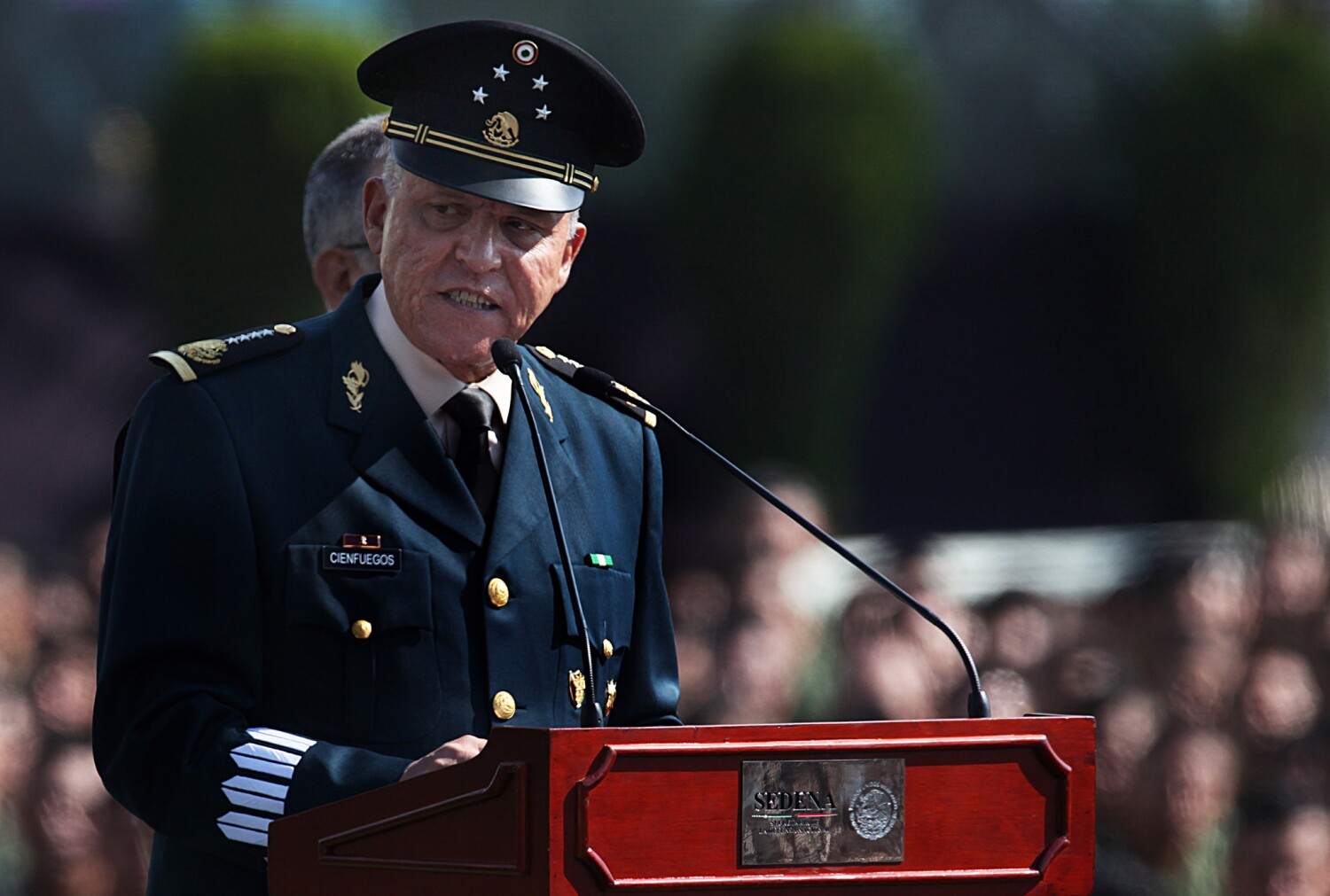 The U.S. Department of Justice berated Mexico late Friday for releasing hundreds of pages of evidence in a drug trafficking case against a former Mexican defense minister, saying the publication of sensitive information shared in confidence violates a mutual aid treaty.

“Publicizing such information violates the Treaty on Mutual Legal Assistance between Mexico and the United States, and calls into question whether the United States can continue to share information to support Mexico’s own criminal investigations,” said the statement from an agency spokeswoman.

The statement also addressed Mexico’s decision not to charge the nation’s ex-defense chief with any crime.

Retired Gen. Salvador Cienfuegos, who served as defense minister from 2012-18, was arrested on drug trafficking charges at Los Angeles International Airport last year but was later released to presumably face charges at home after an intense lobbying campaign by Mexican diplomats.

On Friday, Mexican President Andrés Manuel López Obrador announced that Cienfuegos would not face charges in Mexico and accused the U.S. Drug Enforcement Administration of fabricating a case against him.

“Why did they do the investigation like this?” López Obrador said. “Without support, without proof?”

The Mexican president called U.S. drug agents incompetent and suggested that the timing of the Cienfuegos arrest shortly before the November U.S. presidential election may have been politically motivated. He ordered the release of evidence collected in the case by U.S. authorities because he said it would bolster his claims.

The Department of Justice statement defended its case against Cienfuegos, saying that the evidence released “show(s) that the case against General Cienfuegos was, in fact, not fabricated.”

“A U.S. federal grand jury analyzed that material and other evidence and concluded that criminal charges against Cienfuegos were supported by the evidence,” the statement said.

The evidence included thousands of intercepted cellphone messages between two alleged cartel members discussing a man they refer to as “Padrino.”

U.S. prosecutors say Padrino, or the Godfather, was a code name for Cienfuegos. Mexican prosecutors have called that assertion into doubt.

The documents also contain screenshots of messages said by prosecutors to be from Cienfuegos alerting the men to upcoming military operations and discussing delivery of bribes.

Cienfuegos was arrested Oct. 15 and charged with helping Mexico’s H-2 cartel smuggle tons of cocaine, heroin, methamphetamine and marijuana to the United States. U.S. prosecutors say he not only protected the cartel, but used the military to attack its rivals.

Current military leaders were incensed when Cienfuegos was arrested and pushed López Obrador to win his release.

The Mexican president did that, in part by threatening to withhold future security cooperation with the U.S. unless Cienfuegos was freed.

Mexico’s top diplomat, Foreign Minister Marcelo Ebrard, vowed that Mexico would conduct an investigation of Cienfuegos that would “meet the highest standards of effectiveness and honesty.”

Cienfuegos was not placed under arrest after he was returned by U.S. officials to Mexico. And less than two months after he returned to Mexican soil, officials cleared him of wrongdoing.

Security experts who analyzed the documents released by Mexico said it was difficult to draw conclusions from them.

He added that without further clarification, it’s impossible to know “the overall narrative of the accusation and how these pieces fit in.”

Ernst said the Mexican government lost credibility by simply releasing the documents. He said López Obrador appears to be sending a message to the incoming U.S. administration “not to develop any overly ambitious thoughts concerning inducing change in Mexico.”

López Obrador’s actions, he said, also highlight the growing power of the armed forces in Mexican civilian affairs. Troops now lead the fight against illegal immigration, the COVID-19 pandemic and the widespread theft of fuel from gas lines. They run the country’s biggest infrastructure projects and will soon control the nation’s ports and border crossings.

The effort to protect Cienfuegos from prosecution was about “protecting the deal the López Obrador government has struck with the military, in which impunity and the right to continue to self-govern are traded for their acting as a core pillar of the [the president’s] political project,” Ernst said.

The DEA has not responded to requests for comment.

Mike Vigil, a former DEA chief of foreign operations, defended the U.S. case against Cienfuegos in an interview, saying U.S. agents and prosecutors would have clearly identified “Padrino” as the ex-defense minister before having detained him.

“We do not file formal charges or indict someone who is not fully identified,” Vigil said. “That’s just not something we do.”

“The federal prosecutors are very conservative,” he said. “They’re not going to indict anybody unless they have very solid evidence.”