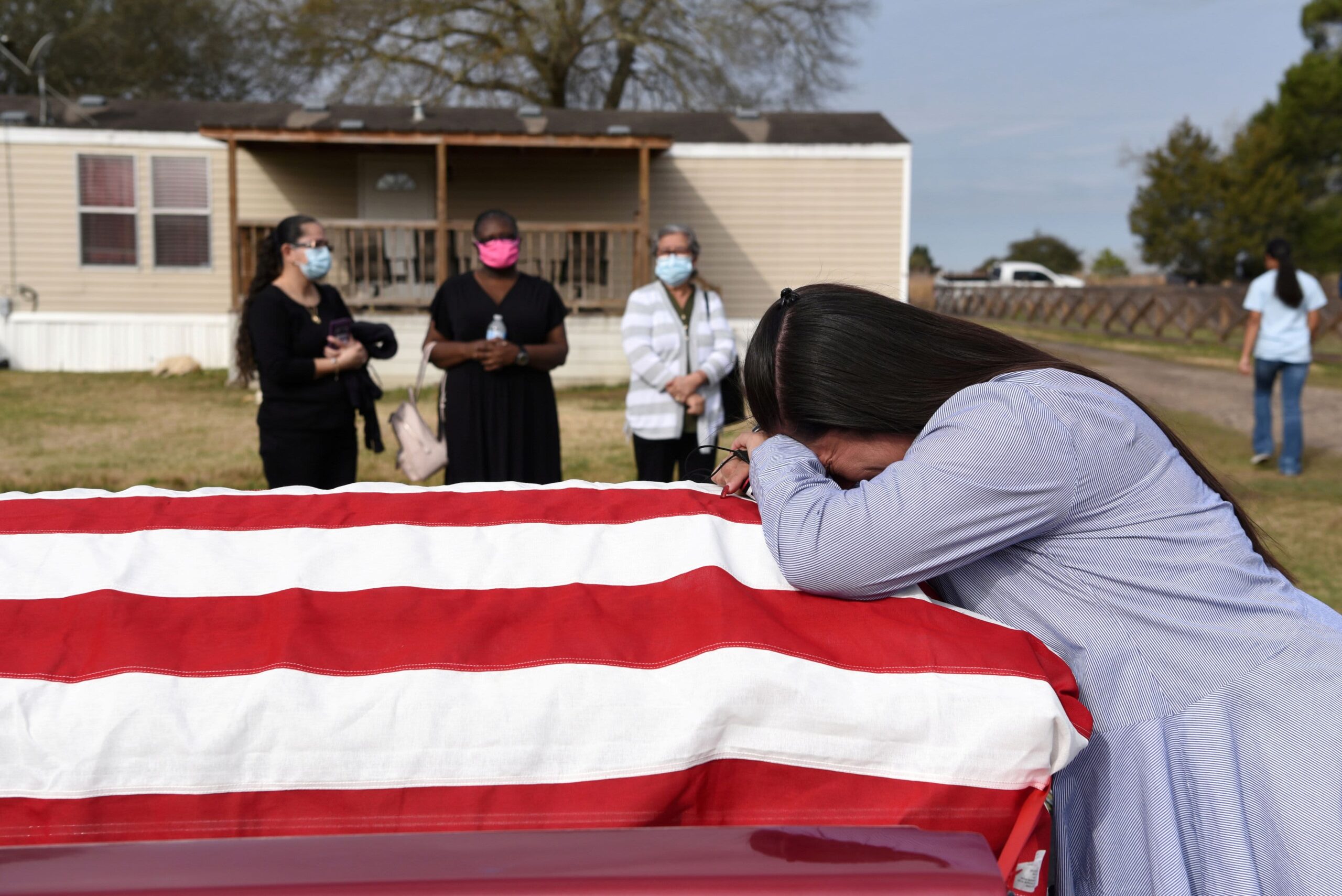 Lila Blanks holds the casket of her husband, Gregory Blanks, 50, who died of the coronavirus disease (COVID-19), ahead of his funeral in San Felipe, Texas, U.S., January 26, 2021.

The United States started 2021 with the deadliest month of the coronavirus pandemic to date.

January’s death toll has already surpassed the previous record number of fatalities set in December, when over 77,400 people in the U.S. died of Covid-19, according to data compiled by Johns Hopkins University. The pandemic has taken more than 79,200 lives so far this month, according to the data.

Over the past seven days, the country has reported an average of more than 3,300 Covid-19 deaths every day, up 12% compared with a week ago, according to Hopkins data.

There’s hope the death toll will slow down in coming weeks. The number of daily new cases reported in the U.S., which epidemiologists use as a leading indicator of whether the outbreak is growing or receding, has been dropping steadily in recent days as a surge driven by interstate travel and holiday celebrations appears to be subsiding.

The U.S. reported about 146,600 new cases on Tuesday, bringing the seven-day average of new cases down to just over 166,300 and down by about 17% compared with a week ago, according to Hopkins data.

The number of people currently hospitalized with Covid-19 across the U.S. is also on the decline, though it remains worryingly high. More than 108,900 people were hospitalized with the disease as of Tuesday, according to data compiled by the COVID Tracking Project, which was established by journalists at The Atlantic. That’s off the peak of more than 130,000 hospitalized patients reported earlier this month.

But the potential spread in the U.S. of new, more contagious strains of the virus, combined with a slower-than-expected rollout of the vaccines, threatens to reverse progress made on combating the outbreak.

The B.1.1.7 strain of the virus, which was first discovered in the United Kingdom and has become the dominant strain there, has been found in a number of states across the U.S. Epidemiologists say that strain appears to spread more easily, and British officials have said it could be more lethal, too.

As of Monday, the Centers for Disease Control and Prevention said 293 cases associated with that strain of the virus have been found in the U.S., mostly in Florida and California.

And earlier this week, the Minnesota Department of Health said it confirmed the first known U.S. case of another strain of the virus that was originally discovered in Brazil. One other so-called variant of concern, called 501Y.V2 or B.1.351, depending on the epidemiologist, was first discovered in South Africa and is worrying scientists because vaccines and drugs appear to be less effective against that strain. No cases associated with that strain have yet been discovered in the U.S.

In an effort to curb the spread of the virus and especially the import of new strains, President Joe Biden earlier this week banned most non-U.S. citizens traveling from South Africa from entering the U.S. and extended travel restrictions for Europe, the U.K. and Brazil.

The president has painted a bleak picture of the outbreak, saying Monday that the U.S. is “going to see somewhere between a total of 600,000 to 660,000 deaths before we begin to turn the corner in a major way.”

While urging people to wear masks and follow public health measures such as social distancing, Biden is working to ramp up the rollout of the Covid vaccines, blaming the initially slow pace on the Trump administration. On Monday, he said the U.S. could top 1.5 million vaccinations per day, up from his previously targeted pace of 1 million per day, which was already nearly met by the last administration.

“Time is of the essence,” he said earlier this week. “We’re trying to get out a minimum of 100 million vaccinations in 100 days, and move in the direction where we are well beyond that in the next 100 days, so we can get to the point where we reach herd immunity in a country of over 300 million people.”

On Tuesday, he said the government is working to buy 200 million more doses of Pfizer’s and Moderna’s vaccines, bringing the U.S. supply from 400 million doses to 600 million, though that won’t ramp up the pace of vaccinations soon. He also said the administration will increase the number of doses being sent out to states each week by about 20%. Some states have said they have the capacity to vaccinate more people but are limited by supply.