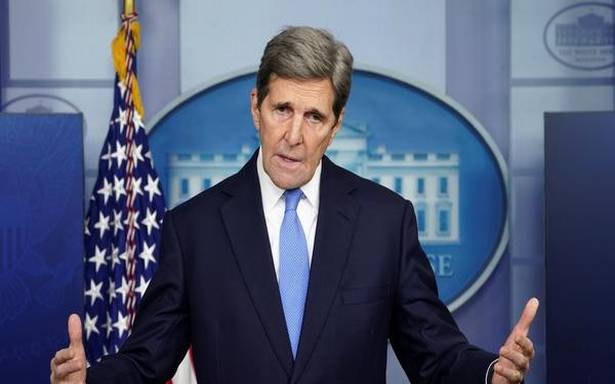 The two countries are currently engaged in a bitter confrontation over various issues, including trade, the origins of the novel coronavirus pandemic, China’s military moves in the disputed South China Sea and human rights.

The Biden administration has ruled out any compromise with China on issues like theft of intellectual property and South China Sea for arriving at a deal on the existential issue of climate change.

The relations between the U.S. and China are at an all-time low. The two countries are currently engaged in a bitter confrontation over various issues, including trade, the origins of the novel coronavirus pandemic, the communist giant’s aggressive military moves in the disputed South China Sea and human rights.

“I am as mindful of that as anybody, having served as Secretary of State and in the Senate, the issues of theft of intellectual property and access to market, the South China Sea. I mean, run the list; we all know them. Those issues will never be traded for anything that has to do with climate. That’s not going to happen,” he asserted.

“So, it’s urgent that we find a way to compartmentalise, to move forward. And we’ll wait and see. But President Joe Biden is very, very clear about the need to address the other issues with China. And I know some people have been concerned. Nothing is going to be siphoned off into one area from another,” Mr. Kerry said in response to a question.

In his maiden media appearance in his new capacity, Mr. Kerry, said that climate change is the existential threat to the world.

“The stakes on climate change just simply couldn’t be any higher than they are right now. It is existential,” he said.

“We use that word too easily, and we throw it away. But we have a big agenda in front of us on a global basis, and President Biden is deeply committed — totally seized by this issue, as you can tell by this executive order and by the other — the initiative for getting back into Paris immediately. That’s why he rejoined the Paris agreement so quickly, because he knows it is urgent,” he said.

“He also knows that Paris alone is not enough — not when almost 90% of all of the planet’s global emissions come from outside of U.S. borders. We could go to zero tomorrow and the problem isn’t solved,” he said.

On Wednesday, Mr. Biden signed executive orders ensuring that ambitious climate action is global in scope and scale, as well as national, here at home. In his executive order, he made climate central to foreign policy planning, to diplomacy, and to national security preparedness.

“It creates new platforms to coordinate climate action across the federal agencies and departments sorely needed. And most importantly, it commissions a National Intelligence Estimate on the security implications of climate change to give all of us an even deeper understanding of the challenges,” Mr. Kerry said.

“It sets forth a process for us to develop an ambitious new Paris target, as well as a US climate finance plan, both of which are essential to our being able to bring countries of the world together to raise ambition and meet this moment when we go to Glasgow for the follow-on agreement to Paris,” he said.

That’s the only way for the world to succeed together. “This is an issue where failure literally is not an option,” Mr. Kerry said.

National Climate Advisor Gina McCarthy said Mr. Biden’s executive order establishes a White House Office of Domestic Climate Policy, and it directs everyone who works for the President to use every tool available at our disposal to solve the climate crisis.

“This order takes historic strides to address environmental injustice. It creates both a White House interagency task force to address environmental justice, as well as an advisory council. It directs the Department of Health and Human Services to create an Office of Climate Change and Health Equity because, after all, climate change is the most significant public health challenge of our time,” she said.

“It tasks the Department of Justice with establishing an Office of Climate Justice because we know the communities who are being hurt, and we know we have to start enforcing the standards today and ensuring that they are part of the solution and in places that we can invest. In fact, it commits 40% of our investment in clean energy towards disadvantaged communities so they can benefit from the new jobs that are available and see that better future,” Ms. McCarthy said.

Mr. Biden’s order establishes a Working Group on Coal and Power Plant Communities. “Because we have to make sure that, in this transition, every agency in government is using every tool at their disposal to drive resources to those communities. It fulfills long-standing commitments to leverage our vast natural resources to contribute to our clean energy future,” she said.

It places a pause and review on new oil and gas leases on federal public lands and waters, consistent with a promise Biden has repeatedly made and has been very clear in the face of efforts to distort his promise. It sets a goal of doubling offshore wind production by 2030, she added. PTI LKJ AMS AKJ AMS

U.S. rules out any compromise with China on IP, South China Sea for climate change