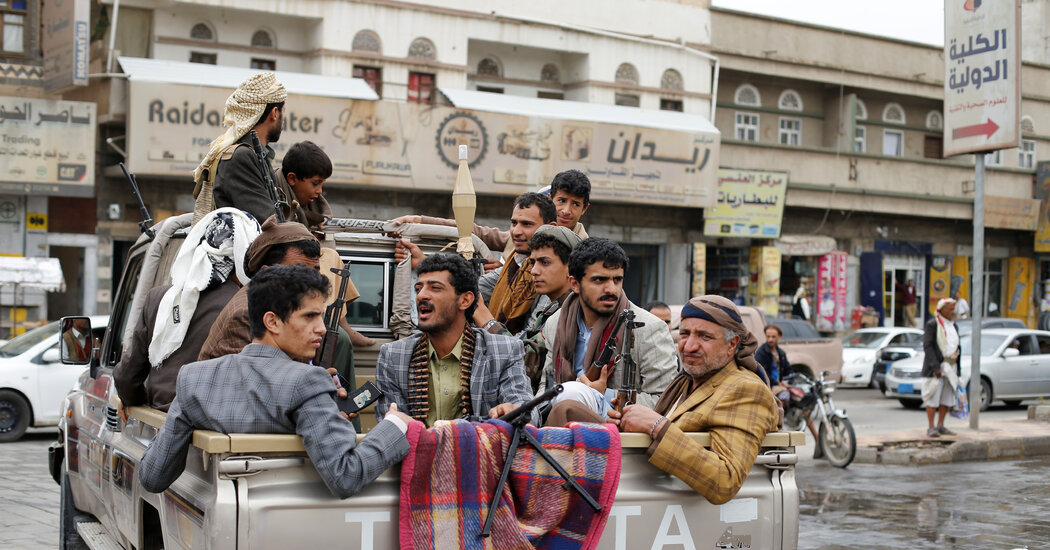 WASHINGTON — Secretary of State Mike Pompeo will designate the Houthi rebels in Yemen as a foreign terrorist organization, four U.S. officials familiar with the decision said on Sunday, deploying one of his last means of hard power against Saudi Arabia’s nemesis at the risk of exacerbating a famine in one of the world’s poorest nations.

It is not clear how the terrorist designation will inhibit the Houthi rebels, who have been at war with the Saudi-backed government in Yemen for nearly six years but, some analysts say, pose no direct threat to the United States.

Mr. Pompeo will announce the designation in his last full week as secretary of state, and more than a month after meeting with Crown Prince Mohammed bin Salman of Saudi Arabia, who began a military intervention with Arab allies against the Houthis in 2015. That campaign has killed civilians, destroyed infrastructure and aggravated a humanitarian crisis that has led to millions of hungry Yemenis.

Spokespeople for the State Department did not respond to requests for comment Sunday night, and the U.S. officials who confirmed the designation spoke on the condition of anonymity as it had not yet been announced. The imminent announcement was reported earlier Sunday evening by Reuters.

The Houthis’ inclusion on the department’s list of foreign terrorist organizations means that fighters within the relatively decentralized movement will be cut off from financial support and other material resources that are routed through U.S. banks or other American institutions.

But the Houthis’ main patron is Iran, which continues to send support despite being hobbled by severe U.S. economic sanctions, rendering the effect of the designation on the rebels more symbolic than searing.

For the rest of Yemen, however, the designation will all but certainly worsen the devastation.

Experts said it would chill humanitarian efforts to donate food and medicine to Houthi-controlled areas in northern and western Yemen, where a majority of the country’s 30 million people live, for fear the aid would be seized by the rebels and used for profit that could be traced back to aid organizations. The rebels also control the capital, Sana, and parts of the strategic port city of Hudaydah, where much of the humanitarian aid from across the world is unloaded.

The United Nations estimates that about 80 percent of Yemenis depend on food assistance, and nearly half of all children suffer stunted growth because of malnutrition. On Nov. 20, the U.N. secretary general, António Guterres, said Yemen was “now in imminent danger of the worst famine the world has seen for decades.”

“I urge all those with influence to act urgently on these issues to stave off catastrophe, and I also request that everyone avoids taking any action that could make the already dire situation even worse,” Mr. Guterres said then. “Failing that, we risk a tragedy not just in the immediate loss of life but with consequences that will reverberate indefinitely into the future.”

Some Houthi leaders had already been singled out for terrorist-related American sanctions. The broader designation against the entire movement has been under consideration by the Trump administration for years.

That Mr. Pompeo is issuing it now, in the administration’s final days, is a sign of his determination to maintain his signature pressure campaign against Iran for as long as possible.

The United States accuses the Houthi rebels of being proxy fighters for Iran, seeking to destabilize neighboring Saudi Arabia by lobbing missiles over its border and striking its oil fields. But a large attack on two state-owned Saudi Aramco oil facilities in September 2019, which the Houthis said they carried out, appeared to be far more sophisticated than the rebels’ previous strikes.

That suggested that Iran was directly involved, as the Trump administration has asserted, despite Tehran’s denials.

“The Trump administration could have leveraged its ties to Saudi Arabia for the past four years to get closer to a resolution on the conflict,” Ariane Tabatabai, a Middle East fellow at the German Marshall Fund, a public policy think tank, said in a recent interview in anticipation of the designation. “Instead, the administration chose to cut blank checks to Saudi leaders.”

She predicted the terrorist designation was part of a strategy to force the administration of President-elect Joseph R. Biden Jr. to maintain the tough line on Iran — or risk the political consequences of having “to explain to domestic critics and regional partners why it’s reversing sanctions.”

The Trump administration has steadfastly backed Saudi Arabia and its allies in the war in Yemen, providing intelligence and billions of dollars in weapons over the objections of Congress, despite indiscriminate bombings that have killed civilians and other military atrocities that could amount to war crimes.

In October, the rebels released two American hostages and the remains of a third in a prisoner swap that also allowed about 240 Houthis to return to Yemen from Oman. The freed Houthis included fighters captured by the Saudi-led coalition and officials who had gone to Oman for international peace talks and were not allowed to go home.

Beyond the looming famine, the terrorist designation could also seal the fate of an immense rusting oil tanker moored off Yemen’s western coast.

Compared to a floating bomb, partly because of the combustible buildups of gas it may be carrying in its tanks, the decaying vessel, the FSO Safer, is not far from the Hudaydah port. If it either explodes or simply falls apart, it could dump more than 1.1 million barrels of oil into the Red Sea, destroying its ecosystem in a spill four times greater than that of the Exxon Valdez disaster in 1989.

About a half-dozen Houthis are aboard the vessel, along with a small crew of state-backed engineers from the state-owned company that holds the title to it, said Ian M. Ralby, the chief executive of I.R. Consilium, a maritime security consultancy. The terrorist designation could prevent U.N. negotiators from working with the Houthis as quickly as possible to repair the vessel or otherwise defuse the danger it poses.

“If we do not want to cause Yemen to lose an entire generation,” Mr. Ralby said, “we need to back off this designation.”