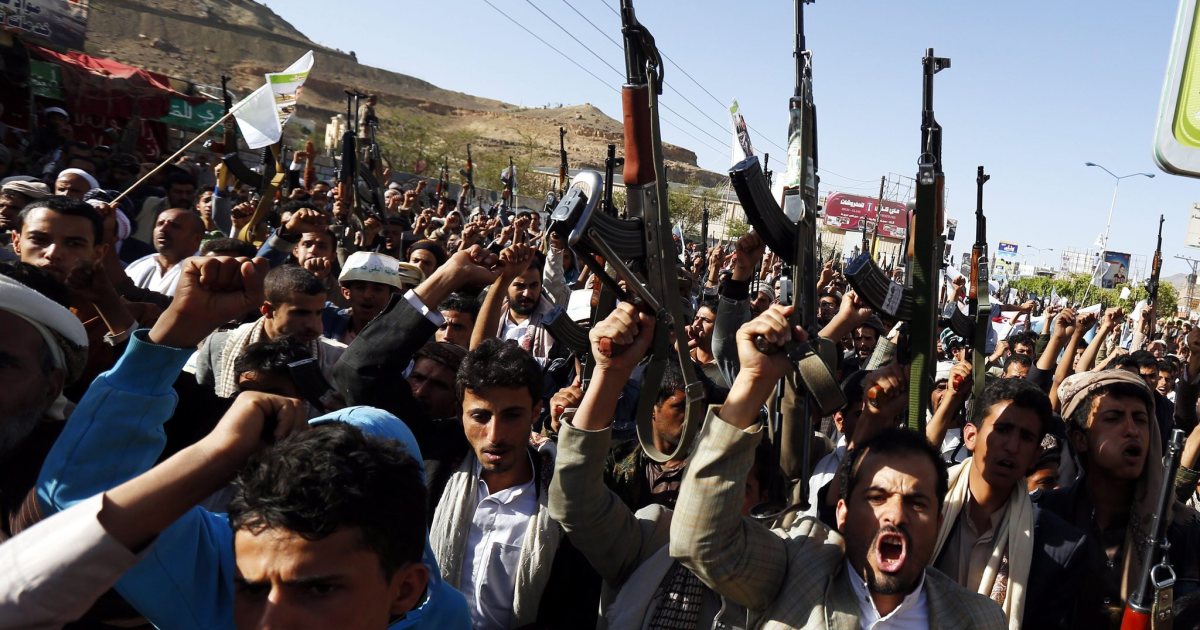 Washington plans to designate Yemen’s Houthi rebels as a foreign terrorist organization Monday, the State Department said, despite pleas by diplomats and aid groups that insist the move would push the country closer to famine, impede the delivery of aid to more than 20 million people and complicate any future peace talks.

The blacklisting of the Iran-supported group during the Trump administration’s final days in office is part of an 11th-hour effort to buttress the administration’s so-called maximum pressure campaign against Iran and limit President-elect Joe Biden’s room to maneuver.

The decision, reportedly the subject of a months-long debate among policymakers, would put the Houthis on the U.S. list of foreign terrorist organizations and of specially designated global terrorists starting Jan. 19 — the day before Biden’s inauguration. Three of the rebel group’s top officials, including its leader, Abdul Malik Houthi, are to be added to the latter list as well.

The designation would prohibit any individual or organization from transacting with the Houthis, who are also known as Ansar Allah. It would also shut down any financial or other material support through U.S. banks and other entities. Non-U.S. parties engaging in transactions with the Houthis would trip sanctions denying them use of U.S. currency and access to U.S. markets as well as the SWIFT banking system — a crucial tool for commercial partners, traders or banks working with humanitarian groups to deliver aid.

In a statement released Sunday ahead of notifying Congress of the blacklisting, Secretary of State Michael R. Pompeo said the “designations are intended to hold [Ansar Allah] accountable for its terrorist acts, including cross-border attacks threatening civilian populations, infrastructure and commercial shipping.”

He also pointed to an attack late last month on the airport in the southern Yemeni city of Aden, which killed 26 people in a bombing that targeted senior officials of the internationally recognized government of Yemeni President Abd Rabbu Mansour Hadi. The government blamed the assault on the Houthis.

“The designations are also intended to advance efforts to achieve a peaceful, sovereign and united Yemen that is both free from Iranian interference and at peace with its neighbors,” Pompeo said.

Aid groups criticized the designation as counterproductive and likely to exacerbate suffering in a country where some 70% of the population lives in areas under the Houthis’ control and relies on aid. Humanitarian organizations regularly coordinate with the Houthis’ parallel government structures to deliver assistance to the civilian population.

“If we were to have drawn up the worst-case scenario, this is what we would have drawn up,” said Scott Paul, the humanitarian policy lead at Oxfam America. The designation, he said, would not only block U.S. humanitarian aid and goods but would also prevent personnel from entering northern Yemen.

He added that, although the threat of the blacklist had been on the books since November, the administration had yet to present a robust alternative system to allow legitimate aid to continue to flow in unhampered.

“They’ve been working at this now actively for three months, and the fact that they don’t have a licensing structure in place should tell you all you need to know about how easy it is to do this properly,” Paul said.

A high-ranking Houthi official excoriated the U.S. for the move.

“Notifying Congress to arrest those who broke into it would achieve a better result for Pompeo than designating Ansar Allah,” Mohammad Ali Houthi, a member of the group’s Supreme Political Council, tweeted, referring to last week’s siege of the U.S. Capitol. “Your terror is what killed and starved the children of Yemen.”

In his statement, Pompeo acknowledged concerns that the designations would affect the humanitarian situation in Yemen but said the State Department would put measures in place to mitigate the impact and provide licenses for aid activities.

“We have expressed our readiness to work with relevant officials at the United Nations, with international and nongovernmental organizations and other international donors to address these implications,” Pompeo said.

Despite that pledge, aid groups expect a chilling effect on aid transfers, with companies and banks afraid to transact with parties in Yemen for fear of running afoul of the U.S. sanctions. Lacking ironclad assurances, humanitarian organizations that rely on public and private funding from the U.S. may pull out completely.

Even the threat of the designation in November scared off traders and caused food imports to plummet by a quarter, Mark Lowcock, U.N. undersecretary-general for humanitarian affairs, told the Financial Times.

The war in Yemen, which began in 2014 and pits the Houthis against the Saudi-backed government, has already claimed almost a quarter of a million lives, according to U.N. estimates, including 131,000 from indirect causes such as lack of food, health services and infrastructure.

It has also been accompanied by disease outbreaks, famine, and an economic collapse that has made the Yemeni rial plunge to half of its value against the dollar — a cataclysm in a country where most goods are imported.

The Trump administration blames the Houthis for the collapse, even as Washington and other Western nations have continued to sell billions of dollars’ worth of arms and materiel to Saudi Arabia and the United Arab Emirates, which have led a coalition in support of the Yemeni government. Saudi Arabia spearheaded a punishing air campaign — with logistical and intelligence support from the U.S. — and imposed a land, air and sea blockade that has compounded civilian suffering.

UAE Foreign Minister Anwar Gargash welcomed the U.S.’ new move, saying that “the Houthis’ coup against the state, its institutions and Yemeni society ignited the flames of violence and chaos and has led to the tragic collapse of the humanitarian situation.”

“I am cognizant of the destabilizing role that the Houthis play in the conflict, including by doing Iran’s bidding and obstructing humanitarian assistance,” Meeks said in a statement. “However, this designation makes it harder to deliver life-saving assistance in a country already experiencing the worst humanitarian crisis in the world. Food aid, clean water, and basic health care for millions would be severely impacted. People will suffer and die, and those deaths are entirely preventable.”

Despite the outcry from aid groups, proponents see the terrorism designations as one of the few remaining ways to pressure the Houthis to come to the bargaining table and negotiate an end to the war.

“The Houthis have shown their lack of seriousness throughout this period, along with their constant escalation,” said Mahmoud Shehrah, a diplomat in the Yemeni embassy in Jordan.

He added that the designations were designed to discourage the Houthis from launching a new offensive that could see the group gain a foothold near the Bab al-Mandeb Strait, a vital shipping corridor on the Red Sea.

“Their escalation proves that the international community had been unable to pressure the Houthis through diplomatic means,” he said.

The Yemeni government welcomed Pompeo’s announcement, which “should be viewed as an effective tool to stop [the Houthis’] deplorable behavior, and whose application is not designed to negatively impact the conduct of relief and humanitarian operations,” Yemeni Foreign Minister Ahmed Bin Mubarak said in a statement. “Indeed, it is intended to push the Houthis to end their machinations and compel them to genuinely pursue realizing a secure and sustainable peace.”

Aid groups are pinning their hopes on the Biden administration moving quickly to revoke the blacklisting.

“This needs to be a Day 1, Hour 1, or Minute 1 action for them to take,” Paul said. “In this instance, acting ‘on Day 1’ cannot be only a figure of speech, as lives hang in the balance.”

Back to Top
Close Add post
X
New crystal, new you?WorldPart of The “New” Issue of The Highlight, our home for ambitious stories that explain our world. Carnelian has many faces. When it’s brittle and a dar…

X
Capitol police chief calls for permanent fencingWorld"In light of recent events, I can unequivocally say that vast improvements to the physical security infrastructure must be made to include permanent f…
close