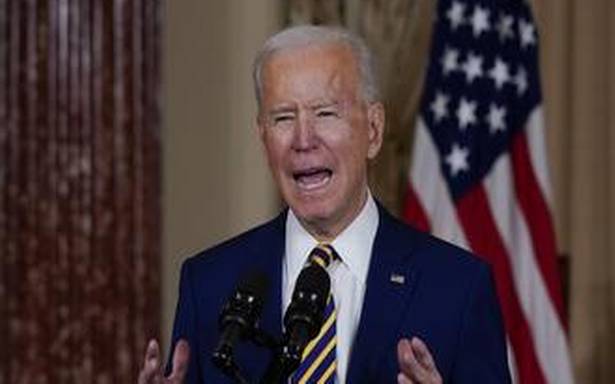 In his first address to the State Department as President, he said alliances were America’s greatest asset and that the U.S. would engage with adversaries and competitors diplomatically when it was in the country’s interest

In his first address to the State Department as President, Joe Biden outlined his administration’s foreign policy priorities, reiterating that America was back and engaging the world, but acknowledging the world had changed in the last few years. The new President said alliances were America’s greatest asset. He said the U.S. would engage with adversaries and competitors diplomatically when it was in the country’s interest, highlighting strategies in the Russia and China contexts.

Mr. Biden also used the speech to announce the end of U.S. support to the Saudi-led war in Yemen and the appointment of foreign service officer Tim Lenderking as special envoy to Yemen. However, he said, the U.S. would continue to support Saudi Arabia in defending its sovereignty.

The President also announced a pause in the withdrawal of U.S. troops from Germany, while the U.S. government — led by Defense Secretary Lloyd Austin and Secretary of State Antony Blinken — reviews its global military footprint to make sure it is in alignment with foreign policy and national security policies.

Mr. Biden repeatedly returned to the theme of democracy and a need for the U.S. to work from a “position of strength” by strengthening itself at home and reclaiming its credibility.

During his speech he highlighted the reversal of the travel ban from several Muslim majority countries and lifting the ban on transgender persons in the military. He also talked the importance of a free press and restoring the daily press briefing at the White House.

Mr. Biden said that foreign policy would need to be aligned with the interest of American working families.

“There’s no longer a bright line between foreign and domestic policy. Every action we take in our conduct abroad, we must take with American working families in mind,” he said.

The President said America must confront growing authoritarianism, while he singled out Russia and China.

“American leadership must meet this new moment of advancing authoritarianism, including the growing ambitions of China to rival the United States and the determination of Russia to damage and disrupt our democracy,” he said.

Mr. Biden said America’s diplomacy must be rooted in democratic values, which he listed as, “defending freedom, championing opportunity, upholding universal rights, respecting the rule of law, and treating every person with dignity.”

He acknowledged that these values had been “pushed to the brink” in recent weeks — a reference to the January 6 attack on the U.S. Capitol.

Mr. Biden said the U.S. would engage with “adversaries” and “competitors” when it was in the country’s interest, citing Russia and China as examples.

He said that was the reasoning behind the U.S. extending by five years the New START Treaty (an Obama-era arms control pact) with Russia. However, this was not giving Russian President Vladimir Putin carte blanche to do anything, Mr. Biden said. He called for Russian dissident Aleksei Navalny to be released “immediately and without condition.”

“ … I made it clear to President Putin, in a manner very different from my predecessor, that the days of the United States rolling over in the face of Russia’s aggressive actions — interfering with our elections, cyber attacks, poisoning its citizens — are over,” he said. The U.S. could deal more effectively with Russia if it worked with its allies, Mr. Biden said.

On China, Mr. Biden said the U.S. would counter its economic abuses and counter its aggression but would work with Beijing when it was in America’s interest (the U.S. is expected to seek Chinese cooperation on climate change and pandemic preparedness for instance).

“We’ll confront China’s economic abuses; counter its aggressive, coercive action; to push back on China’s attack on human rights, intellectual property, and global governance. But we are ready to work with Beijing when it’s in America’s interest to do so,” he said.

“We will compete from a position of strength by building back better at home, working with our allies and partners, renewing our role in international institutions, and reclaiming our credibility and moral authority, much of which has been lost,” Mr. Biden said, citing the fact that his administration had reversed Mr. Trump’s steps to withdraw America from the Paris Climate Accord and the World Health Organisation.

Mr. Biden called on the Burmese military to relinquish the power they have seized and release political leaders and activists, desist from violence and lift telecommunications restrictions.

“ …We will work with our partners to support restoration of democracy and the rule of law, and impose consequences on those responsible,” he said.

“Over the past two weeks, I’ve spoken with the leaders of many of our closest friends — Canada, Mexico, the U.K., Germany, France, NATO, Japan, South Korea, Australia — to being [begin] reforming the habits of cooperation and rebuilding the muscle of democratic alliances that have atrophied over the past few years of neglect and, I would argue, abuse,” he said.

The U.S. had been closely cooperating with allies in recent days, Mr. Biden said with regard to the military takeover in Myanmar (Just days ago, a State Department official had said that American officials were in touch with their Indian and Japanese counterparts on the unfolding situation in Myanmar).

“There can be no doubt: In a democracy, force should never seek to overrule the will of the people or attempt to erase the outcome of a credible election,” Mr. Biden said, presumably referring to both the Myanmar coup d’etat and the final weeks of the Trump administration.

“There’s no longer a bright line between foreign and domestic policy. Every action we take in our conduct abroad, we must take with American working families in mind,” he said.

Mr. Biden also told diplomats that he valued their work. The President and Mr. Blinken have said they want to revitalise the State Department, which had seen significant workforce attrition during the Trump administration, with individuals being edged out and roles being politicised.

“I value your expertise and I respect you, and I will have your back. This administration is going to empower you to do your jobs, not target or politicise you. We want a rigorous debate that brings all perspectives and makes room for dissent. That’s how we’ll get the best possible policy outcomes,” he said.