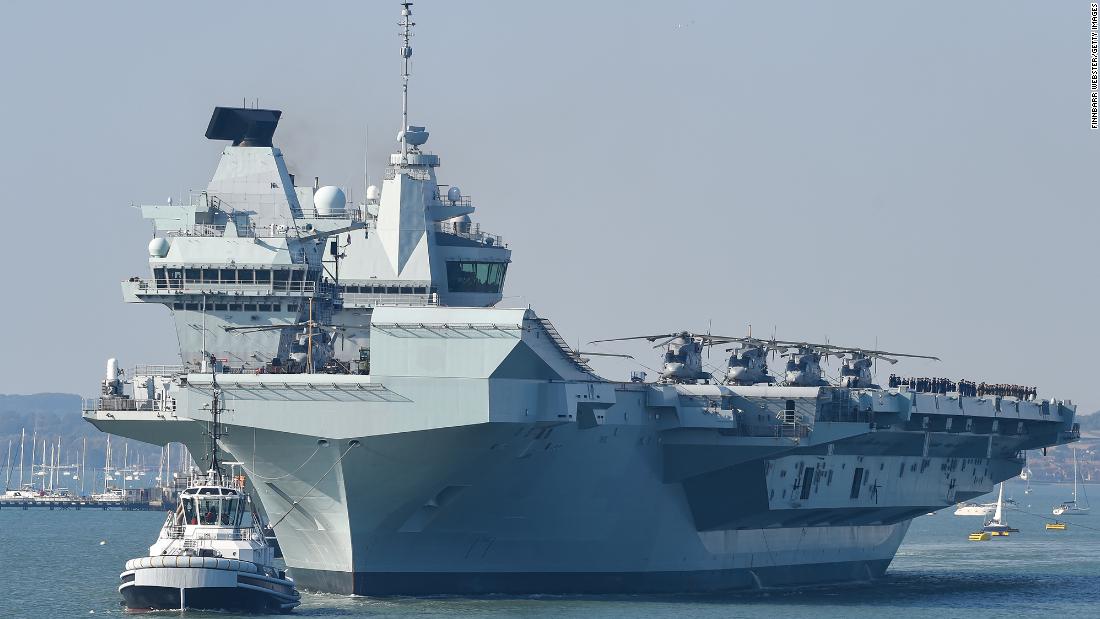 The designation means the 65,000-ton carrier, its air assets including F-35 stealth fighter jets and helicopters, as well as its escorting destroyers, frigates, submarines and supply ships, are ready to deploy within five days of receiving orders to do so.

Qualified pilots and ground crews are on notice.

“This is a hugely significant milestone for HMS Queen Elizabeth, the Royal Navy and the whole country. This achievement is a testament to the determination of our service personnel and industry workforce who have delivered this first-rate military capability, a capability held by only a handful of nations,” UK Defense Minister Jeremy Quin said in a statement.

“In practical terms, my Strike Group is now at Very High Readiness, meaning we are at 5 days’ notice to deploy, if required, in response to global events & in defence of British interests,” Moorehouse tweeted.

In a followup tweet, he hinted at what is to come. Carrier strike group staff are planning for the Queen Elizabeth’s first operational deployment, which Moorhouse said would encompass the Royal Navy’s largest peacetime task group in 25 years and be proof of Britain’s commitment to maintaining worldwide security — “a visible demonstration of Global Britain,” Moorhouse called it.

Specific dates for the first deployment have yet to be announced.

UK as a global power

Since 2017, UK defense officials have been saying the carrier’s first deployment would include Asia and the Pacific on a route from Britain that would likely take it through the South China Sea.

“The UK is a global power with truly global interest … we must be prepared to compete for our interests and our values far, far from home,” then-UK Defense Minister Gavin Williamson said in 2019.

The carrier would take its contingent of state-of-the-art F-35 stealth fighter jets into a region where “China is developing its modern military capability and its commercial power,” Williamson said in an address to the Royal United Services Institute think tank in London.

Even ahead of Monday’s Royal Navy readiness announcement, Chinese military officials were warning London against interfering in the region.

“We believe the South China Sea should not become a battleground for big power competition, or a sea full of roaming warships,” Senior Col. Tan Kefei, a spokesman for China’s Defense Ministry, said at a December 31 news briefing reported by the state-run Xinhua media agency in a posting on the Chinese military’s official English website.
Foreign powers sending their warships to the South China Sea, where China has built military bases on man-made islands, were behind the “militarizaiton” of the waterway, Tan said.

“The Chinese military will take necessary measures to protect national sovereignty, security, and its developmental interests, as well as safeguard peace and stability in the region,” he said.

NATO and the Chinese threat

Tan’s comments followed a report published late last year from the North Atlantic Treaty Organization (NATO), of which Britain is a major player, calling the rise of the Chinese military a threat to the alliance.

“China has an increasingly global strategic agenda, supported by its economic and military heft. It has proven its willingness to use force against its neighbors, as well as economic coercion and intimidatory diplomacy well beyond the Indo-Pacific region,” the NATO report said.

“China is increasingly likely to project military power globally, including potentially in the Euro-Atlantic area.”

And in 2019, UK and US warships conducted six days of coordinated drills in the South China Sea.

The UK-US cooperation is expected to continue with the carrier’s upcoming deployment to the Asia-Pacific.

When the Queen Elizabeth held large-scale exercises in the Atlantic last fall, US Marine Corps F-35B fighter jets and Royal Navy F-35s were on board — forming the largest concentration of fifth-generation stealth fighters ever as sea. That same aircraft contingent is planned for the Pacific deployment.

As those exercises for the carrier strike group began, Moorhouse, its commander, noted the significance.

“Protected by a ring of advanced destroyers, frigates, helicopters and submarines, and equipped with fifth-generation fighters, HMS Queen Elizabeth is able to strike from the sea at a time and place of our choosing; and with our NATO allies at our side, we will be ready to fight and win in the most demanding circumstances,” he said in a statement last fall.