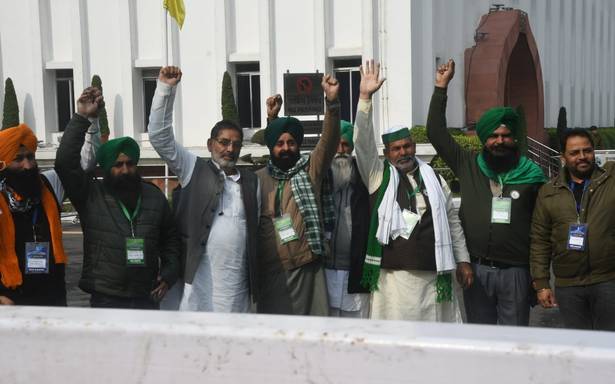 The seventh round of talks between protesting farmer unions and three central ministers got underway here on Monday afternoon to break the over-a-month-long deadlock on recent farm laws.

Union Agriculture Minister Narendra Singh Tomar, Railways, Commerce and Food Minister Piyush Goyal and Minister of State for Commerce Som Parkash, who is an MP from Punjab, are holding the talks with the representatives of 40 farmer unions at the Vigyan Bhawan.

The meeting began with a two minute silent tribute to the farmers who lost their lives during the ongoing protest, according to a farm union representative. More than 50 protestors have died since the agitation began, from various causes including traffic accidents, heart attacks, and at least three protestors who allegedly died by suicide.

Farm leaders and Central Ministers observing a two minute silence in memory of protesters who have died, before beginning the seventh round of talks at Vigyan Bhavan.

On December 30, the sixth round of talks was held between the government and the farmer unions, where some common ground was reached on two demands — decriminalisation of stubble-burning and continuation of power subsidies.

However, no breakthrough has been reached so far on the two main demands of the protesting farmers — a repeal of the three recent farm laws and a legal guarantee to the MSP procurement system.

Thousands of farmers, mainly from Punjab, Haryana and western Uttar Pradesh, are protesting at various Delhi borders for over a month against the three laws. They have stayed put despite heavy rains and waterlogging at protest sites over the last couple of days, besides severe cold weather conditions prevailing in and around the national capital.

Enacted in September 2020, the government has presented these laws as major farm reforms and aimed at increasing farmers’ income, but the protesting farmers have raised concerns that these legislations would weaken the MSP and “mandi” (wholesale market) systems and leave them at the mercy of big corporations.

The government has maintained that these apprehensions are misplaced and has ruled out repealing the laws.

While several opposition parties and people from other walks of life have come out in support of the farmers, some farmer groups have also met the agriculture minister over the last few weeks to extend their support to the three laws.

Last month, the government had sent a draft proposal to the protesting farmer unions, suggesting seven-eight amendments to the new laws and a written assurance on the MSP procurement system. The government has ruled out a repeal of the three agri laws.