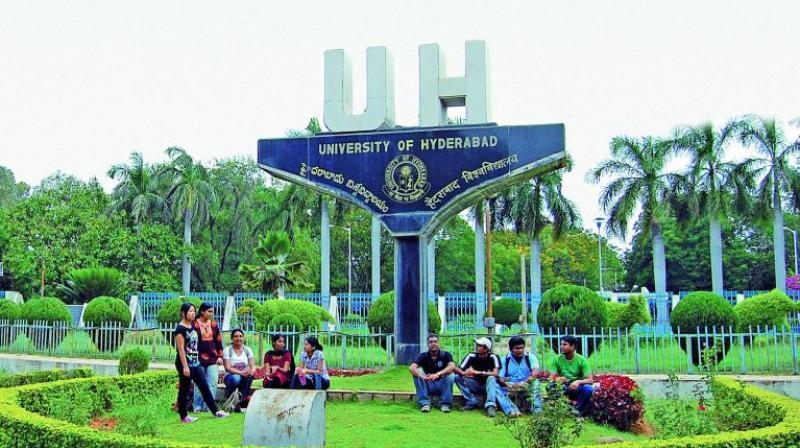 Hyderabad: The University of Hyderabad Student Union has planned a five-day agitation on the campus, ahead of the Academic Council meeting scheduled on December 22.

The union has demanded redressal of grievances of students including the issue of filling up vacant seats for post-graduate courses, admissions for which were closed on November 19 before other Central universities. Citing UGC guidelines from September 2020, the Student Union said that the last date for admission to vacant seats was November 30, whereas the UoH closed admissions, much earlier adding to the woes of students seeking admissions amidst a pandemic.

They also demanded that the University reinstate the previously followed 1:6 criteria for admission into the research programme where six students will be interviewed for one vacant seat.

Further, complaining that the non-science research departments were being devalued, the student union has demanded that students of all departments should be called back to campus in a phased manner. They said that while the administration had called back science research students, facilitating them with quarantine facilities and a new hostel on the South campus, similar enthusiasm was not shown for students of the social cciences and other streams, hence making them lose out on crucial research opportunities.

The union added that while the Task Force has been issuing directives for an inclusive online pedagogy environment, it has done more harm to students than benefit them due to accessibility issues.

The student union demanded that an efficient health centre under Covid-19 protocols be set up urgently for the safety of students. It wrote to the UoH administration alleging harassment of students by quarantining Covid-19 positive students in the university guest house and charging them Rs 500 per day.

Abhishek Nandan, UoH Student Union president, said that two students were placed under quarantine at the guest house. Upon their discharge, the authorities did not let the students go until they paid the full amount, he said. “At a time when students are barely making ends meet and struggling even to pay basic fees, charging extra money is nothing less than harassment,” Nandan added.

UoH official spokesperson Vinod Parvala, responding to these allegations, said, “The university is treading very cautiously in view of the pandemic, especially looking at what happened at IIT-Madras. We request students to be patient in this situation. We are looking at all possibilities and prioritising needs of all research departments slowly and steadily’.

Reacting to the allegations of students being harassed into paying quarantine charges, he said that no coercion was being used, and the university was not geared with Covid-19 treatment facilities.

“It is not even a quarantine charge, they are in fact basic guest house charges being levied. As far as we are concerned, we are not authorised as a public higher education institution to run a quarantine facility,” he said. No student was being forced to pay the charges, he said.