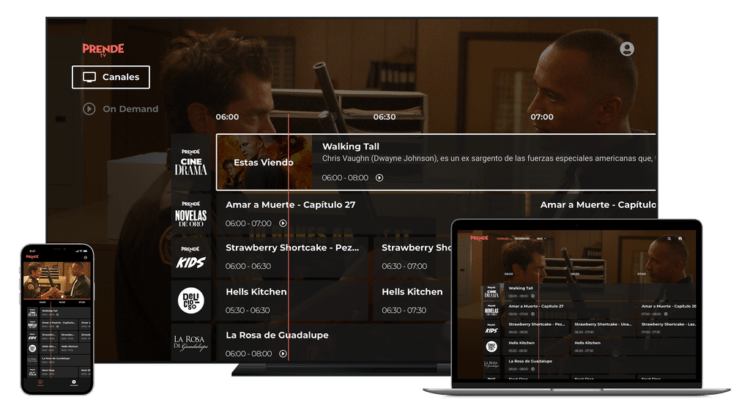 Univision has launched PrendeTV, describing it as the “first and only streaming channels-based and VOD service created specifically for U.S. Hispanic audiences.”

Univision has been plotting a new strategic course since being taken over by a consortium of investors led by former Viacom CFO Wade Davis, who now runs the company as CEO.

While the streaming marketplace is crowded with hundreds of subscription outlets and thousands following the AVOD model, certain offerings on PrendeTV are exclusive. A curated channel and VOD lineup features titles from Univision and Televisa content libraries not found on other streaming services.

T-Mobile Shutting Down TVision, Installs Philo As Base Video Offering At $10 A Month, Sets YouTube TV As Premium Option

Advertisers at launch include blue-chip companies like Chase, Clorox, Coca-Cola, Toyota, Universal Pictures, Verizon and Walmart. Distribution-wise, the service will be widely available, including via the two biggest gateways in U.S. streaming: Roku and Amazon Fire TV. (Roku availability will happen over the coming weeks.)

“The launch of PrendeTV signals a new transformation era for Univision as we expand our already dominant position in U.S. Hispanic broadcasting into the AVOD streaming market and build on our leadership as the largest Spanish-language content and media company in the U.S.,” Univision President and Chief Transformation Officer Pierluigi Gazzolo said in a press release.