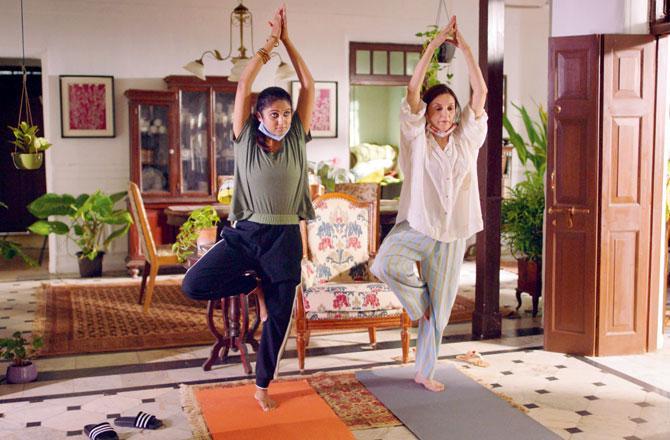 I’ve taken a whole day to watch Unpaused, pausing for hours between each short film in this anthology. Just because a film is short, doesn’t mean you don’t allow it to simmer and seep in, before jumping on to the unrelated next, as if binge-ing on a show.

Have learnt this the hard way — agreeing to judge short film competitions in the past, knowing that all the movies combined clock an easy-peasy three hours max (a regular ’90s Hindi picture). Only that once you’re through, you’re frickin’ so mentally exhausted, it’s hard to recall one from the other way.

Amazon Prime Video should display Unpaused, listing each short as a separate episode to click on — the way Netflix has, with its simultaneously released Tamil shorts’ anthology Paava Kadhaigal. That’s how you’d find Black Mirror on Netflix as well.

Although the sheer intensity of watching multiple episodes of Black Mirror as a continuous viewing experience, I suspect, has intimidated many — making it the most loved, least watched TV shorts’ series ever.

Speaking of which, clearly the first short in this five-film lockdown/pandemic omnibus, super-fine Glitch (directed by Raj&DK), seems an ode of sorts to Charlie Brooker’s Black Mirror, while the fourth, and quite likely the best, Avinash Arun’s Vishaanu, unquestionably bears a touch of Bong Joon-ho’s Parasite.

The second one, and the weaker link of the lot, Nikkhil Advani’s The Apartment is instantly inspired by a series of suicide deaths during 2020. The other two, Tannishtha Chatterjee’s Rat-a-Tat and Nitya Mehra’s Chand Mubarak — performance-heavy — are about unlikely relationships that develop during isolation; my darling quarantine, if you may.

All of them essentially examine the onset of a new ‘normal’ or ‘paranormal’, as it were. Which was also the case with Amazon Prime’s similar collection in Tamil, Putham Pudhu Kaalai, that dropped in October 2020. That one, for the most part, was so astoundingly amateurish (except for a couple of shorts) that I simply couldn’t believe some of the names associated with it; notably, Mani Ratnam.

Unpaused is Bombay’s version of the same Chennai anthology. In every sense, it is substantially superior, with smarter scripts, and with a sense of a beginning, middle and end. Amazon’s involvement, and therefore the top producers/directors on the roster, ensures, one, top class camera work and production design.

Besides, a wide array of A-level actors that you can marvel at, even while the genre usually lends itself to audition tapes for raw/untested talents. Many thanks to OTT as an entertainment platform in itself that some of the actors on this series, in particular Geetika Vidya Ohlyan (from Netflix’s Soni) or Abhishek Banerjee (from Amazon Prime’s Paatal Lok) would’ve have been relegated in traditional cinema to junior artistes.

They’re solid stars in their own right on screen here (in Arun’s Vishaanu), with the stunning Marathi heroine from Sairaat, Rinku Rajguru, paired alongside charm-personified, Lillette Dubey (in Chatterjee’s Rat-a-Tat). Taking away nothing, of course, from bona fide Bollywood leads, Richa Chadha (in Advani’s The Apartment) or Gulshan Devaiah and Saiyami Kher (in Raj&DK’s Glitch).

Shining special torchlight though on the boy opposite Ratna Pathak Shah in Mehra’s short, Chand Mubarak — young Shardul Bharadwaj. Most recently we saw him kill it in the ultimate ‘cinema verite’ festival film, Eeb Allay Ooo, that’s also opened in Indian theatres. If desi film awards were merit-based, he’d be nominated for all top prizes of 2020 for Eeb by Feb.

What’s equally cinema verite like, or true, for lockdown films in general? And it’s a genre, alright. That all the actors (including the crew) in the movie, at least emotionally, in some ways, have been through what they intend to express, before the camera — a life during pandemic itself. As has the rest of the planet. Can’t think of any human experience you can say that for — maybe a solar/ lunar eclipse (but not even that).

It leads to two things. Abundance of material as personal responses. And the clichés of thali banging, etc. Hell, my inbox is full of short films — made by every Gopal, Ram, or Verma, with a cellphone. They’re hard to sit through. And, no, I will not watch your short film; life’s too short. That said, glad that I gave this time, aaram se, to relive the universal sci-fi/medical/emotional trauma/drama that we’re all still living through, as we speak.