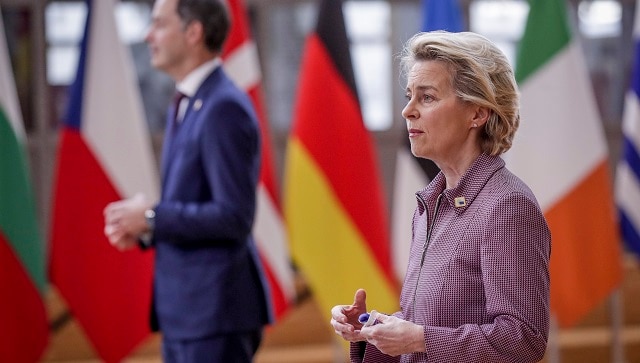 Brussels: After weeks of relentless pessimism, the European Union said Wednesday there was now a clear, if narrow, path to reaching an agreement with the United Kingdom on a post-Brexit trade deal that should avoid costly chaos on the borders at the end of the year.

EU Commission President Ursula von der Leyen said she is seeing clear progress in the talks held in Brussels, saying that “the good news is that we have found a way forward on most issues.”

Von der Leyen confirmed that the major sticking points had been reduced to just two — fair competition in the EU market and fishing rights for EU vessels in UK waters.

Even though she still spoke only of a “very narrow” path to a deal, she added that “I can tell you that there is a path to an agreement.” It was far more optimistic than previous comments coming from British Prime Minister Boris Johnson, and even any assessment in the past few months.

“This is now a case of being so close and yet being so far,” von der Leyen told the EU parliament, which will have to approve any deal brokered.

Britain left the 27-nation bloc in January but until the end of this year remains in a transition period that keeps all trade ties the same with the EU. These talks deal with trading relations between the two sides starting on 1 January. “The clock puts us in a very difficult position,” said von der Leyen.

The talks have struggled almost from the start about nine months ago, worsened by the fact that Britain said early this fall that it might not respect the withdrawal treaty it signed with the EU that led to its departure from the bloc.

Both sides have been heavily involved in preparing for a no-deal split on 1 January which would add more costs, controls and bureaucracy to a process which will already be cumbersome at best, as custom and standards controls will be imposed where there used to be none.

Both sides appeared close to ending the talks when British Prime Minister Boris Johnson and von der Leyen on Sunday promised to “go the extra mile” to clinch an agreement.

With traffic jams already hampering access to cross-Channel ports like Dover in England and Calais in northern France, the time pressure is adding urgency to the talks.

The EU is willing to accept British trade with no tariffs or quotas, but only if the UK respects the rules and regulations that have made the EU’s single market of 450 million consumers so successful.

Johnson, however, says he does not want British businesses to be hemmed in by EU restrictions, especially if they are tightened as time goes by.

While progress was being made on the issues of state aid and business standards, the standoff continued on fisheries and EU access to UK waters in return for UK seafood exports to the EU. Von der Leyen said that “it sometimes feels we will not be able to resolve this question.”

Johnson has made fisheries and UK control over its waters a key demand in the long saga of Britain’s departure from the EU. It has been four-and-a-half years since Britons voted narrowly to leave the EU and — in the words of the Brexiteers’ slogan — “take back control” of the UK’s borders and laws.

Since fisheries only account for a fraction of a percent of the economy on both sides of the English Channel, it remains unlikely that it would endanger a deal to safeguard hundreds of thousands of jobs and tens of billions in trade. “We must continue to try finding a solution,” von der Leyen said. “It is the only responsible and right course of action.”