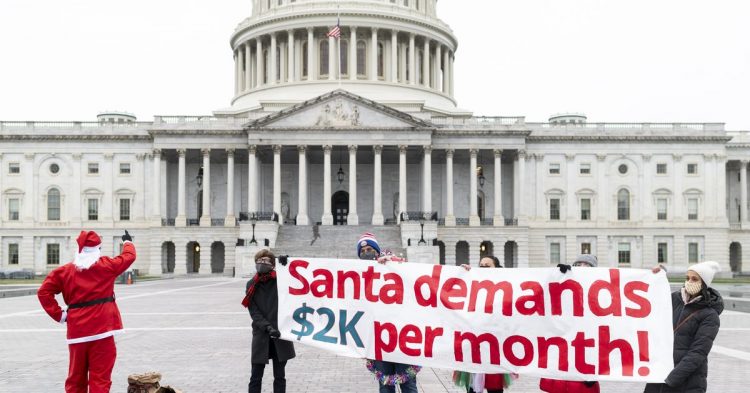 Excluded from stimulus relief up until now, US citizens and permanent residents who filed a joint tax return with an undocumented spouse will receive a check for $600, as well as $600 per dependent child. The benefits phase out for individuals making more than $75,000 and couples making more than $150,000.

The impact is significant: An estimated 16.7 million people live in mixed-status households nationwide, including 8.2 million US-born or naturalized citizens. That number includes those who have been shielded from deportation under the Obama-era Deferred Action for Childhood Arrivals program, children and young adults whose parents often don’t have legal status.

The law also allows households with at least one family member who has a Social Security number to retroactively receive checks for up to $1,200 and an additional $500 per child under the last round of stimulus relief enacted in late March.

But many undocumented immigrants and other taxpaying noncitizens who do not have a Social Security number are still barred from receiving stimulus checks under the law.

That carries public health consequences. Undocumented immigrant workers are particularly vulnerable to Covid-19 due to inadequate access to health care. Noncitizens are significantly more likely to be uninsured compared to US citizens, which may dissuade them from seeking medical care if they contract the virus. And compounding matters are the Trump administration’s hardline immigration policies — including wide-scale immigration raids and a rule that can penalize green card applicants for using Medicaid — which have made noncitizens afraid to access care.

Some Democratic lawmakers have consequently argued that while the new relief package represents progress, it still does not go far enough in delivering much-needed aid to immigrant families.

The CARES Act, which was enacted in March, barred those in households with people of mixed immigration status — where some tax filers or their children may use what’s called an Individual Taxpayer Identification Number (ITIN) — from receiving stimulus checks.

The IRS issues ITINs to unauthorized immigrants so they can pay taxes, even though they don’t have a Social Security number. If anyone in the household had used an ITIN — either a spouse or a dependent child — that meant no one in the household will qualify for the stimulus checks under the CARES Act unless one spouse served in the military in 2019.

The exclusion for mixed-status households defied current practices: Many other federal programs are designed in such a way that US citizen children of unauthorized immigrants can access necessary benefits, including the child tax credit, food stamps, housing assistance, welfare benefits, and benefits from the Special Supplemental Nutrition Program for Women, Infants, and Children.

But there is a precedent for this kind of exclusion. Amid the global financial crisis in 2008, Congress handed out tax rebates to most American taxpayers, except for the spouses of immigrants who didn’t have Social Security numbers.

Advocates from Georgetown Law and Villanova Law nevertheless filed a class action lawsuit in the spring challenging the CARES Act on behalf of seven US citizen children of unauthorized immigrant taxpayers. They argued that it unfairly discriminated against these children based on their parents’ immigration status, and denied them equal protection under the law in violation of the US Constitution’s due process clause.

That lawsuit is still pending, but the new aid package signed on Sunday could render that challenge moot since it makes mixed-status families retroactively eligible for CARES Act stimulus checks.

“The refusal to distribute this benefit to US citizen children undermines the CARES Act’s goals of providing assistance to Americans in need, frustrates the Act’s efforts to jumpstart the economy, and punishes citizen children for their parents’ status — punishment that is particularly nonsensical given that undocumented immigrants, collectively, pay billions of dollars each year in taxes,” Mary McCord, legal director of Georgetown Law’s Institute for Constitutional Advocacy and Protection, said in a statement when the lawsuit was filed.