Home News US House to push for removing Trump through 25th Amendment: A look at what the provision entails – World News , Firstpost

US House to push for removing Trump through 25th Amendment: A look at what the provision entails – World News , Firstpost 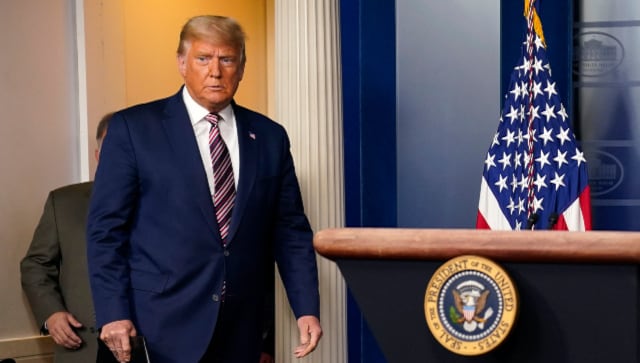 As United States president Donald Trump faces growing calls for his resignation and the possibility of impeachment, there is renewed attention on the 25th Amendment to the country’s Constitution.

Nevertheless, the possibility of the 25th Amendment being invoked in the present situation is not a far-fetched one. The US House Speaker Nancy Pelosi said on Sunday the House will proceed with legislation to impeach Trump. CNN has quoted a source close to Mike Pence as saying that the vice-president has not ruled out an effort to invoke the 25th Amendment and wants to preserve the option in case Trump “becomes more unstable.”

Pelosi made the announcement in a letter to colleagues, saying the House will first vote to push Vice-President Mike Pence to invoke the powers of the 25th Amendment to remove Trump from office. After 24 hours, she said, the House would proceed with legislation on impeachment.

In this context, here is a look at what the 25th Amendment stipulates and its history.

The 25th Amendment’s Section 4 lays out what happens if the president becomes unable to discharge his duties but doesn’t transfer power to the vice president himself, as noted by the Associated Press.

The vice president and majority of the Cabinet can declare the president unfit. They then would send a letter to the Speaker of the House and president pro tempore of the Senate (meaning, the person temporarily holding the post) saying so. The vice president then becomes acting president.

The president can send his own letter saying he is fit to serve. But if the vice president and majority of the Cabinet disagree, they can send another letter to Congress within four days. Congress would then have to vote. The president resumes his duties unless both houses of Congress by a two-thirds vote say the president is not ready.

The push for an amendment detailing presidential succession plans in the event of a president’s disability or death followed the assassination of President John F Kennedy in 1963. President Lyndon B Johnson in his 1965 State of the Union promised to “propose laws to insure the necessary continuity of leadership should the President become disabled or die.” The amendment was passed by Congress that year and ratified in 1967.

However, as noted by an article in CNN, the portion of the amendment that allows the vice president and Cabinet to remove the president had in mind a leader who was in a coma or suffered a stroke.

In the past, US presidents have temporarily given up power, but those instances have been generally been brief and voluntary, for example when the president was having a medical procedure.

In 2002, President George W. Bush became the first to use the amendment’s Section 3 to temporarily transfer power to Vice President Dick Cheney while Bush was anesthetized for a colonoscopy. Section 4 of the amendment, which allow the Cabinet to declare the president unfit, has never been invoked.