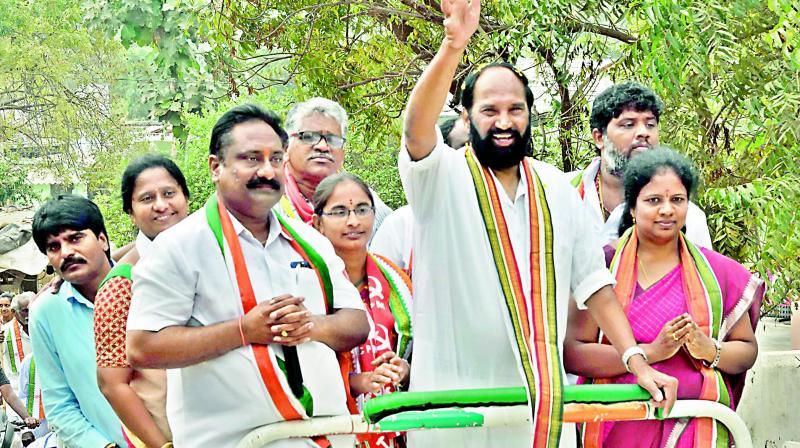 HYDERABAD: Telangana Pradesh Congress Committee (TPCC) president N. Uttam Kumar Reddy condemned the TRS and the BJP for linking the Covid-19 vaccine with the Greater Hyderabad Municipal Corporation (GHMC) elections and alleged that both parties were trying to intimidate voters by indirectly conveying that those who do not vote for them would be denied the vaccine dose, as and when it is available.

Addressing road shows at M.S. Makhta, Malakpet and other places on Friday, he said that the BJP-led government at the Centre and the TRS government were equally responsible for nearly three lakh Covid positive cases and about 1,500 deaths in Telangana state, especially Hyderabad, which have been reported since the outbreak of the pandemic.

Similarly, neither Union Ministers nor the Chief Minister K. Chandrashekar Rao had visited any of the flood-affected areas in Hyderabad to console the victims. More than 100 people were killed and thousands of families lost all their belongings due to the floods, he said.

“BJP, TRS and MIM are enacting a rivalry drama that has been scripted by Union home minister Amit Shah and is choreographed by Chandrashekar Rao. They are maintaining synchronisation wherein a provocative statement is countered by a venomous remark and for practical action, they are visiting temples or memorials. Even before the people could make out that they are being misled, another leader gives a controversial statement and the rumblings go on,” he said.

Uttam Kumar Reddy said, “The Congress will give `50,000 to every flood-affected family and `5 lakh and `2.5 lakh to fully and partially destroyed houses, respectively. An ex gratia of `25 lakh will be paid to families whose kin died due to floods. We will also bring Covid-19 treatment under Aarogyasri and facilities at Gandhi, Osmania, Niloufer and other hospitals would be duly upgraded.”