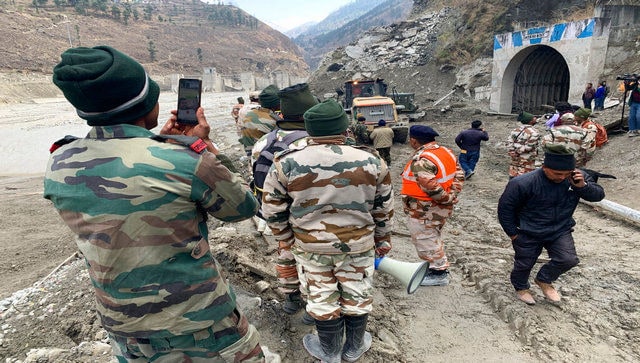 Rescuers stand outside as their colleagues use machinery to remove muck and debris from a tunnel after a part of a Himalayan glacier broke off sending a devastating flood downriver in Tapovan. AP

The toll in the Uttarakhand flash floods rose to 34 on Wednesday with two more bodies being recovered and more than 170 still missing, according to several media reports.

The missing people include those working at NTPC’s 480-MW Tapovan-Vishnugad project and the 13.2-MW Rishiganga Hydel Project, and villagers whose homes nearby were washed away after a glacier burst at Joshimath on Sunday triggered an avalanche and a deluge in the Alaknanda river system.

Late Wednesday evening, after three days of efforts to rescue 30-35 labourers trapped in NTPC’s Intake Adit tunnel in Uttarakhand’s Tapovan, the rescue team had to change their strategy, The Indian Express reported.

The change was brought about after NTPC authorities informed that the last known worksite of the trapped labourers is another silt filtration tunnel located 12 metres below the Intake Adit.

Garhwal commissioner Ravinath Raman told The Indian Express, “Earlier, we were told about the probability of about 34 labourers present 180 metres inside the Intake Adit tunnel, and we were digging in that direction. Today, they (NTPC authorities) informed us that the last known worksite of the labourers is a silt filtration tunnel (SFT) 12 metres below the Intake Adit Tunnel and about 72 metres from its opening. With this, the strategy of going up to 180 metres has been changed. Drilling will be done in the SFT and lights with cameras will be lowered into the area.”

Sources also told the newspaper that Uttarakhand government authorities, in a meeting today, directed NTPC officials to share “correct” information, and send expert engineers of the tunnel to the site to assist in the rescue operations.

Earlier Wednesday, Hindustan Times reported that rescuers were still clearing the slush and boulders from the tunnel in NTPC’s hydel power project in Tapovan, but were unable to reach them. Rescuers are using drones to laser scan the tunnel to determine the volume of slush and find the workers and dog squads have also been deployed, the newspaper reported.

“Till Wednesday evening 34 bodies were recovered out of which 10 have been identified while 24 are yet to be identified. Now, out of the total 204 missing, 170 are yet to be found,” Uttarakhand’s director general of police, Ashok Kumar told the newspaper.

The bodies of two police personnel found Tuesday among the dead were identified on Wednesday as assistant sub-inspector Manoj Choudhary and constable Balbir Singh. Choudhary was deployed as a security guard at the NTPC project in Tapovan while Singh was at the Rishi Ganga project, the newspaper reported.

Amid the doom and gloom there was a glimmer of hope after two persons who were listed as missing in the avalanche and flash floods returned to their homes safely on Wednesday after being stranded in different areas of Chamoli district following the calamity three days ago, officials told PTI.

Singh and Rashid were among those missing after the calamity, as per official records. The duo were stranded while they were returning to their villages, the officials said.

The families of workers missing from the Rishiganga hydel project site created a ruckus on Wednesday accusing the authorities of not carrying out the rescue operations properly. The kin of around 40 missing workers engaged in a heated argument with the authorities of the project for two hours, alleging lack of urgency in the rescue work.

“It is four days since the tragedy occurred but all the focus is on restoring connectivity. Rescuing the missing people does not seem to be the priority,” alleged a man from Punjab, whose brother Jugal worked at the Rishiganga hydel project.

“Jugal’s phone rings when his number is dialled,” he said.

Rishiganga project manager Kamal Chauhan, who had to face the wrath of the families, said his help was not being taken by the administration to locate the missing.

Meanwhile, Tibetan spiritual leader Dalai Lama has written to Uttarakhand chief minister Trivendra Singh Rawat, expressing his condolences to the families of the people killed in a glacier disaster in Chamoli district of the state.

“I offer my condolences to those who have lost loved ones, and pray for them. I also pray for the safety and well-being of those who are still missing. I understand that both the central and the state governments are engaged in rescue work and are doing their utmost to provide relief to people affected by this calamity,” the letter read.

“As a gesture of solidarity with the people of Uttarakhand, I have asked the Dalai Lama Trust to make a donation towards the relief and rescue efforts,” it added.