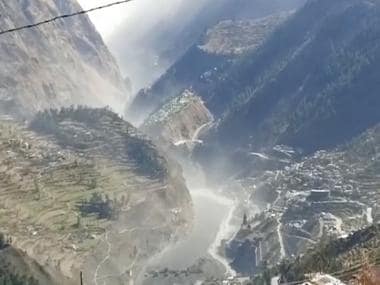 At least seven people were left dead and 125 missing after a portion of the Nanda Devi glacier broke off in Uttarakhand’s Chamoli district on Sunday, triggering an avalanche and massive flooding along the Alaknanda, Dhauli Ganga and Rishi Ganga rivers.

Rescue efforts are focussed on extricating 30 to 35 workers trapped in a tunnel of the Tapovan-Vishnugad hydel project on the Dhauli Ganga river, an official said late Sunday night.

Around 30 to 35 people including workers and employees of the 480 mw Tapovan-Vishnugad hydel project on the Dhauli Ganga river are feared trapped inside one of the tunnels following the avalanche, project GM RP Ahirwar said.

JCBs and Pokland machines are being used to cut into the debris clogging the tunnel to rescue the trapped workers, he said, adding that efforts are being made on priority to save as many lives as possible, he said.

Uttarakhand DGP Ashok Kumar IPS said on Twitter that the rescue work on the second tunnel was halted temporarily but had begun again.

Rescue work on the second tunnel was stopped temporarily only due to some rise in water level..it has already started again. The machine clearing the slush again at the entry of tunnel..some agencies are misquoting ..@ANI @aajtak @ABPNews pic.twitter.com/PW3eigANKQ

Earlier, news agency PTI had reported that sixteen men were rescued safely from a tunnel in the Tapovan project but at least 125 remain missing.

Homes along the way were also swept away as the waters rushed down the mountainsides in a raging torrent. There were fears of damage in human settlements downstream, including in heavily-populated areas. Many villages were evacuated and people taken to safer areas. However, by evening, it became clear that downstream areas were safe.

In the afternoon, News18 quoted Union Power Minister RK Singh as saying that 16 NTPC staff were caught in a tunnel while 45 others were trapped at a second location.

Union Power Minister @RajKSinghIndia – 16 NTPC staffers were caught in a tunnel, contact established with them. At a second location 45 caught. Tunnels blocked by debris. @ITBP_official and Garhwal Rifle trying to open tunnel and rescue people

As night fell in the ecologically-fragile Himalayas, rescue work in the already difficult-to-access areas became even more difficult, thus prompting fears that the toll would rise.

Brave #Himveers of ITBP rescuing trapped persons from the tunnel near Tapovan, #Dhauliganga, #Uttarakhand this evening after 4 hrs of efforts. Total 12 persons were rescued from the tunnel out of which 3 were found unconscious. After first aid, carried on stretchers to road head. pic.twitter.com/iHsrFXjhDd

A 13.2 MW small hydro project on the Rishi Ganga was swept away in the glacier burst but there was no danger of floods in downstream areas as the water level had been contained, the National Crisis Management Committee (NCMC), headed by Cabinet Secretary Rajiv Gauba, was informed at an emergency meeting in the National Capital.

The NCMC was also told that people trapped in project tunnel were rescued by the Indo Tibetan Border Police (ITBP) while efforts were on to rescue those trapped in another tunnel. The operation was coordinated by the Army and the ITBP, an official spokesperson said.

As per a report by the Indian Express, an ITBP spokesperson said that the Dhauli Ganga river was also flooded.

The flood also affected the downstream hydro project of NTPC at Tapovan on the river Dhauli Ganga, a spokesperson told news agency PTI. There is also no threat to neighbouring villages, according to information provided by the Central Water Commission (CWC).

Connectivity with some border posts was “totally restricted” due to a bridge collapsing near Reni village, close to the project site, an ITBP spokesperson said.

At the NCMC meeting, concerned agencies of the central and the state governments were asked to keep a strict vigil on the situation. A team from the DRDO, which monitors avalanches, was being flown in for surveillance and reconnaissance.

Besides, NTPC managing director was asked to reach the affected site immediately. Two teams of the NDRF were sent and three additional teams flown in from Hindon airport in Ghaziabad. The troops are expected to reach the affected region tonight. Indian Navy divers are also being flown in and aircraft and helicopters of the Indian Air Force (IAF) are on standby, the spokesperson said.

Chief Minister Trivendra Singh Rawat told the media that seven bodies had been recovered and at least 125, including two policemen, were missing.  According to The Hindu, Rawat said that five local persons are reported to have been swept away in the flash flood. “Missing persons are about 125 — this figure could be more also [sic],” the report quotes him as saying.

The chief minister also announced a compensation of Rs four lakh to the kin of the deceased.

As per the Hindustan Times report, Rawat said he conducted an aerial survey of the area and later visited Reni village by road to take stock of the situation. “One main bridge and four small other bridges were damaged, cutting off the right side of the Reni village and eleven other villages,” he said.

As per PTI, the disconnected villages includeGahar, Bhangyun, Raini Palli, Pang Lata, Suraithota, Tolma and Fagrasu. Arrangements have been made to continue uninterrupted supplies of essentials to these villages, Rawat said.

There are 17 gram sabha areas affected by the avalanche, out of which 11 are inhabitedwhile the residents of the rest had moved to lower areas during the winter, Rawat said.

Team of glaciologists to study cause of flood Rawat also said the cause of the tragedy in Chamoli will be studied by experts and currently efforts are directed towards rescue operations. According to PTI, Kalachand Sain, director of the Wadia Institute of Himalayan Geology — which had conducted studies on the 2013 flash floods in Uttarakhand that killed nearly 5,000 people —  said two teams of glaciologists will head to Joshimath-Tapovan on Monday to study the causes of massive flood.   “The teams will study the reasons behind the incident. Our teams will be looking into different aspects of glaciology,” Sain said, adding that it is too early to comment on the development.  Sain added that the Sunday’s incident was quite “peculiar” as there was no rain or melting of snow. Earlier in the day, in a series of tweets, Rawat had said that a disaster had been reported in Chamoli around 10.45 am and the state was doing its best to deal with the disaster. “Flow from Tehri dam was stopped to facilitate smooth passage of rising waters on RishiGanga and Alaknanda. All the villages an low lying areas on the banks were vacated & water flow from Srinagar dam was increased to manage higher water flows due to disaster,” he had said.

A disaster was reported at Raini village at around 1045 am, affecting two dam sites in Chamoli. Immediate instructions were issued to take stock of the situation and take emergency measures. Simultaneously, state’s disaster response mechanism was activated. #Uttarakhand — Trivendra Singh Rawat (@tsrawatbjp) February 7, 2021

Speaking at an event in West Bengal’s Haldia, Modi said that he was in constant touch with the chief minister of Uttarakhand, and was keeping track of the situation. Rescue and relief efforts are underway and every attempt is being made to help the affected people, the prime minister said. Hailing the fighting spirit of the people of Uttarakhand, Modi said the entire nation is praying for them.

According to the Prime Ministers Office, Prime Minister Narendra Modi approved Rs two lakh  ex-gratiafrom the PMNRF each to the next of kin of those who lost their lives. Rs. 50,000 would be given to those seriously injured, the PMO said.

The chief minister of states like Delhi, Uttar Pradesh, too extended help to the Uttarakhand chief minister while several other leaders expressed concern and condoled the loss of lives.

I join the nation in praying for the safety of all those affected by the flash flood caused by a glacier burst in Chamoli district of Uttarakhand. I am sure that the State and Central governments are trying their best to mitigate the crisis. #Uttarakhand

Congress president Sonia Gandhi urged all party workers and volunteers to help the people hit by a massive glacier break-off in Uttarakhand’s Joshimath in the relief and rescue efforts.

Earlier in the day, the Uttar Pradesh government issued an alert to the authorities in all districts on the banks of the Ganga and asked them to continuously monitor the water levels in the river and shift people to safer places if required.

Meanwhile, Gujarat chief minister Vijay Rupani requested Rawat to ensure immediate help and rescue of pilgrims from the state stranded in Uttarakhand.  Several pilgrims from Gujarat were reportedly stranded after the glacier broke off at Joshimath.

A home ministry spokesperson said four NDRF teams (about 200 personnel) were airlifted to Dehradun and would head to Joshimath. One column of the Engineering Task Force (ETF) of the Army, with all rescue equipment, has been deployed.

Officials told news agency PTI the Army deployed around 400 personnel in rescue operations besides sending two medical teams to affected areas.  They said the Army has also pressed into service a number of its helicopters to assist the civil administration in rescuing people from flood-affected areas, the officials said.

They said the Indian Air Force has operated C-130 and AN32 transport aircraft to airlift personnel from the NDRF to the affected areas. The officials said three Mi-17 helicopters of the IAF were positioned at Jolly Grant airport to airlift NDRF teams to Joshimath and added that field hospitals have been set up in affected areas.

Marine Commandos teams of the Indian Navy are also being readied for deployment in rescue missions in the affected areas, the officials said.

Providing some good news, the India Meteorological Department informed that there is no rainfall warning in the region for the next two days.

News that about 150 labourers were affected had come in the early in the day.  “Representatives of the power project have told me that they are not being able to contact around 150 of their workmen at the project site,” State Disaster Response Force DIG Ridhim Aggarwal had said.