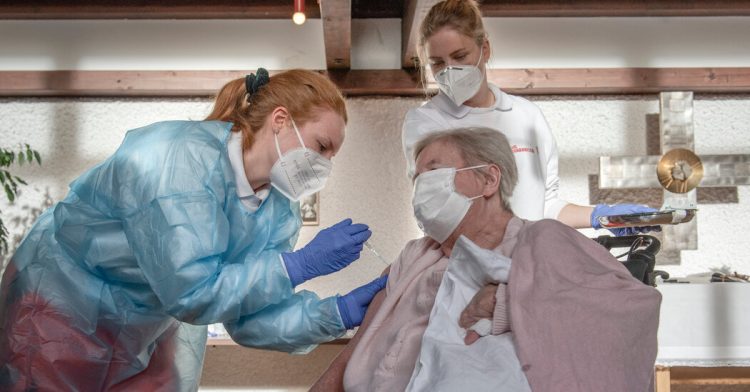 (Want to get this briefing by email? Here’s the sign-up.)

We’re covering the first vaccinations against the coronavirus in Europe, the next steps after a Brexit trade agreement and the curiosity (and optimism) of David Attenborough.

From nursing homes in France to hospitals in Poland, older Europeans and those who care for them rolled up their sleeves on Sunday to receive coronavirus vaccine shots.

The campaign to inoculate more than 450 million people comes as many European countries are struggling with their worst outbreaks since the start of the pandemic. The spread in Britain of a more contagious variant of the virus has further raised alarm.

The numbers: More than 350,000 people across the European Union have died from Covid-19 since the first fatality was recorded in France on Feb. 15. In Poland, November was the deadliest month since the end of World War II.

Here are the latest updates and maps of the pandemic.

The Brexit deal is done. Now what?

Britain is finally departing from the European Union, but its formal exit, complete with a Christmas Eve trade agreement, is only the beginning of a high-stakes experiment to unstitch commercial relations across an integrated continent.

The trade deal leaves financial firms without the biggest benefit of E.U. membership: the ability to easily offer services across the region from a single base. That loss is especially painful for Britain, which ran a surplus of 18 billion pounds, or $24 billion, on trade in financial and other services with the European Union in 2019.

Quote: “We are going to have to learn how to do this as we go,” said Shane Brennan, the chief executive of a British group representing logistics firms. “Let’s hope it’s for the better in the end, but it will be slow, complex and expensive.”

Political effects: Though Conservatives are united over the trade deal for now, Prime Minister Boris Johnson may yet face challenges from hard-liners and business groups as more details emerge.

During the lockdown in Wuhan, China, Zhang Zhan posted videos of hospital hallways lined with patients hooked up to oxygen tanks and of a community health center conducting coronavirus testing.

In May, she abruptly stopped posting. The police later revealed that she had been arrested, accused of spreading lies. Her Monday court date is the first known trial of a chronicler of China’s coronavirus crisis.

Ms. Zhang, a 37-year-old former lawyer, embodied the Chinese people’s hunger for unfiltered information about the epidemic. Three other citizen journalists have disappeared from Wuhan.

Bigger picture: Ms. Zhang’s prosecution is part of the Chinese Communist Party’s campaign to recast China’s handling of the outbreak as a succession of wise, triumphant moves by the government.

Watch: In one of her final videos before her arrest, she filmed the shuttered shops in Wuhan, before being confronted by a man who asked her where she lived and whether she was a journalist.

If you have 5 minutes, this is worth it

A village of widows

Most of the men from Qala-e-Biwaha, a village in western Afghanistan, have disappeared — killed while trying to smuggle opium into neighboring Iran. Their widows have been left to fend for themselves and their children, some of whom have also died while transporting drugs over the border.

Our correspondents report on a place so destitute that the district governor says men seeking work have only two choices: “They can smuggle drugs or join the Taliban.”

Turkey: President Recep Tayyip Erdogan is feeling ire at home as many Turks struggle to buy food in a flailing economy, even as he pursues aggressive — and expensive — foreign policy abroad.

“Deep Adaptation”: The self-published paper made people confront the possibility of the end of the world from climate change. Does it matter if it’s not correct?

Snapshot: Above, a beloved World War II photograph of Martin Adler, an American soldier, in 1944 with the Naldi children, Bruno, Mafalda and Giuliana, in the northern Italian village of Monterenzio. An internet appeal reunited the four again this month.

David Attenborough: At 94, the beloved British naturalist remains curious and optimistic. He talked to The Times about his new docu-series, “A Perfect Planet,” and why the coronavirus may prove to have some positive consequences.

Lives lived: Reginald Foster, who died on Christmas Day at 81, was a former plumber’s apprentice from Wisconsin who dressed like a janitor, swore like a sailor and served as the Vatican’s foremost expert in Latin.

What we’re reading: This Bloomberg article on how the Brexit deal was done. It’s a behind-the-scenes look at “Brexit noir,” a deal that finally came together during a very unusual time.

Cook: Fragrant with lemon zest and vanilla, these cinnamon crumb cake muffins are about as tender and moist as cake gets.

Watch: Pixar’s “Soul” breaks new ground with the animation studio’s first Black protagonist. “Its combination of skill, feeling and inspiration is summed up in the title,” writes our critic.

Do: This stressful, uncertain year hasn’t exactly been a banner year for intimacy. But with a plan, some novelty and a shift of perspective, that can change.

As we head into the final week of 2020, At Home has ideas on what to read, cook, watch and do while staying safe at home.

What were the most-read stories in The New York Times this year? You may not be surprised to learn that two topics — the election and the coronavirus pandemic — dominate the list, accounting for 90 of the top 100 entries. Here’s a selection, plus some other subjects that drew big reader interest.

The U.S. election: More than half of the top 30 most-read pieces in The Times in 2020 were about the election, with the presidential results page at No 1. A few spots behind: the ever-popular, if somewhat dreaded, election night needle (No. 5).

The pandemic: The second and third most-read stories were our coronavirus trackers, one for the U.S. and one for the world. People also wanted to know how the virus got out (No. 48) and where they were in the line to get a vaccine (No. 53). Also of note: this story about a man who stockpiled hand sanitizer hoping to sell it for a profit, which came in at No. 13.

Black Lives Matter: Another theme in this year’s top 100 was the protest movement for racial justice, set off by the police killings of Breonna Taylor (No. 26) and George Floyd (No. 51).

Kobe Bryant: Before the pandemic entered our everyday consciousness, fans said goodbye to the N.B.A. star, who died in a helicopter crash, along with his daughter Gianna and seven others, in January. The Times’s story on the crash is No. 36 on the list.

Killer insects: Sightings of the Asian giant hornet prompted fears that the vicious insect could establish itself in the U.S. and devastate bee populations. “Murder hornets” were No. 24 on the list.