Home EntertainmentBollywood Varun Dhawan: Feel safe when I work with my father

Varun Dhawan: Feel safe when I work with my father 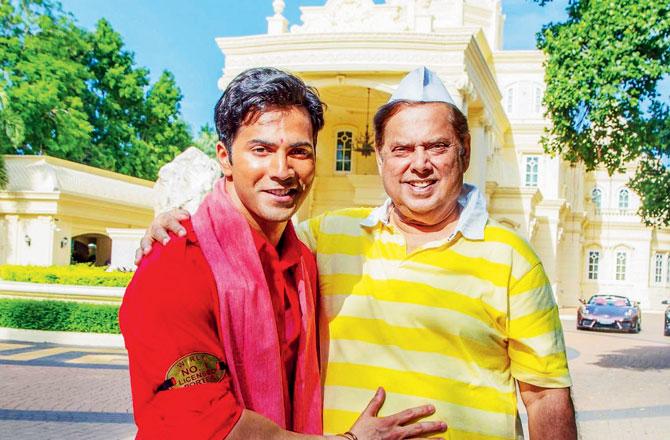 Coolie No 1 feels like homecoming to Varun Dhawan. After trying his hand at middle-of-the-road cinema with October (2018) and Sui Dhaaga (2018) in the past few years, the actor returns to the familiar territory of comedy with the remake of the 1995 hit of the same name. This time, he is on firm footing with director-father David Dhawan helming the laugh riot.

“Dad is the king of comedy. He has tackled the genre for three decades, and has found success in each decade. When you are working with such an accomplished director who knows the genre and its details so well, you know [you’re in good hands]. I feel safe when I work with my father,” says the actor, eager for a hit. The father-son duo have an enviable track record so far, having delivered hits in Main Tera Hero (2014) and Judwaa 2 (2017).

Also Read: Varun Dhawan: Natasha and I wouldn’t have minded a live-in relationship

The actor, however, concedes that the bar has been set high by Govinda, who led the 1995 original. As he steps into the shoes of one of the finest comic actors of Bollywood, Varun says, “Many people are inspired by him. It is unfortunate that the media gives Govinda credit only for comedy; he is unbelievable in emotional scenes as well. Now that Coolie No 1 is set to release, people are remembering how Govinda used to spin magic on screen. I never forgot that. I am one of his biggest admirers.”

The Amazon Prime Video offering sees Varun’s porter character duping his ladylove, essayed by Sara Ali Khan, by pretending to be a billionaire. While he believes that a comedy is the perfect way to end the grim year, one can’t deny that the film’s premise is problematic. “Nowadays, one needs to be sensitive while making jokes. But if you see stand-up comics, they are still telling the jokes they want to. Eventually, it’s a joke and is not supposed to be taken seriously. People need to learn to laugh at themselves. In this film, if people laugh at me, I am okay with it because at the end of the day, I am here to entertain them.”

Also Read: Varun Dhawan to be a part of Bade Miyan Chote Miyan remake? Here’s what the actor has to say