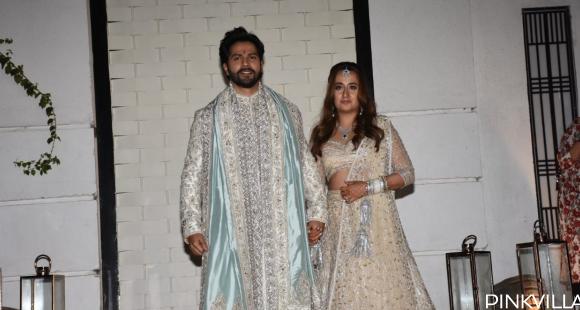 Varun Dhawan and Natasha Dalal were earlier pronounced man and wife on January 24, 2021. Meanwhile, check out an unseen picture from the D-Day.

Varun Dhawan tied the knot with his ladylove Natasha Dalal on 24th January 2021. Yes, this means that another celeb from Bollywood has joined the bandwagon of those who tied the knot recently. Varun and Natasha’s wedding might not be a star-studded affair but this did not stop the shutterbugs from clicking pictures of the adorable duo as they stepped out after the wedding rituals. Moreover, the actor himself shared multiple pictures from the festivities on his social media handle.

Apart from that, the internet is abuzz with numerous unseen pictures from the big fat Indian wedding that happened last week. While speaking of this, we have chanced upon another picture of the newlyweds which is worth a glimpse. It captures a candid moment of Varun and Natasha with the former’s brother Rohit Dhawan and his wife Jaanvi. All of them were probably having some conversation when this adorable moment was caught on the camera. Natasha also shares a great bond with Rohit’s wife Jaanvi.

For the unversed, Varun Dhawan and Natasha Dalal got married at a private wedding ceremony in Alibaug. The function was attended by only 50 guests while keeping in mind the COVID-19 rules and regulations. The bride and the groom stepped out for pictures immediately after the commencing of their wedding vows. The festivities earlier started on January 22 and continued till the D-Day on January 24, 2021. Kunal Kohli, Karan Johar, Manish Malhotra, and Zoa Morani are some of the guests who were present there.