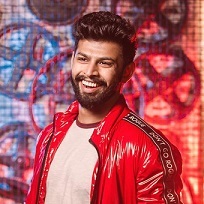 He is also a grandson of famous film actor and politician, Isari Velan. His uncle Isari Ganeshan is a famous producer, owning VELS International production company.

Varun was nominated for the second week elimination process along with the other housemates. In the second week captaincy task, all the contestants had a balloon on their back, whenever the alarm sounded, they had to pick the needle and burst the balloons of the other contestants, the final contestant with the balloon would become the captain of the house. After losing in the captaincy task, Varun along with Abhinay Vaddi tried to make sure that Niroop fails too. This unusual tactic led to a heated discussion between Varun, Abhinay and Niroop.

During Oru Kadhai Sollattuma task, each and every contestant had to share their life journey to which the other contestants had to response to their story through emojis such as like, dislike, heart, etc. Varun also shared his story as the part of the task. He spoke about the greatness of his grandfather, the actor Isari Velan and uncle, Isari Ganesh. Varun revealed that his grandfather was the sole income earner of the family. But suddenly, he passed away, leaving a debt of over Rs. 6 lakhs, which was a big amount over the family at that time and seemed impossible to repay to them. Varun further told that, during such situations, his family stood and tried to overcome the problem. To rectify the issue, his family met the celebrated actor and the Chief Minister of Tamil Nadu, M.G. Ramachandran. He revealed that eventually their issue was resolved.

During the weekend episode, on Saturday, 16th October 2021, host Kamal Haasan pointed out the unusual game tactic played by Varun and Abhinay to disturb Niroop and make him lose in the game held for the captaincy task.