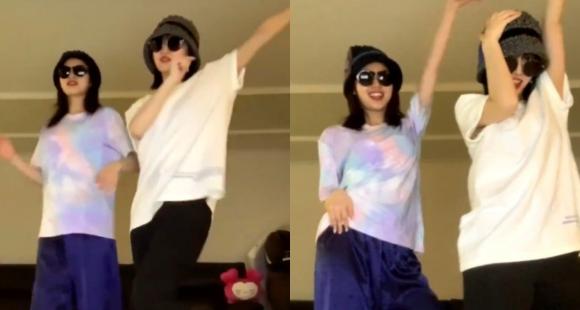 In a sweet turn of events over the weekend, TWICE members Momo and Sana danced to BTS’s Grammy-nominated track Dynamite during a V Live. The duo left ARMY and ONCE weeping with joy.

Over the past few months, BTS”s hit track Dynamite has left everyone grooving. While the fandom has participated in the Dynamite Challenge on TikTok, we’ve seen a few celebrities enjoying the song on various occasions. However, little were we prepared for the events that unfolded over the weekend. In a sweet surprise, TWICE members Momo and Sana hosted a V Live and danced to the tunes of the Grammy-nominated track and dropped jaws of both fandoms, the ARMY and ONCE.

The two K-pop idols were seen wearing jammies, sunglasses and bucket hats as they recreated the iconic steps from the video. The performance didn’t take long to go viral. The adorable video was shared by many along with heartwarming compliments. Some even pointed out that Sana recreated Jungkook’s opening scene. While fans were thoroughly impressed with the two ladies, ONCE members wondered how Nayeon would react to the duo grooving to the track without her. Check out the video below along with a few reactions:

Sana and Momo from @JYPETWICE dancing to Dynamite by @BTS_twt!!!

THEY’RE SO GOOD AND THIS IS A DREAM COME TRUE!!! pic.twitter.com/41VMDuO6N6

This is so cute. They did a great job in dancing to Dynamite and enjoying it!
Thank you Sana and Momo!  pic.twitter.com/qfu5DQQax8

HELLOOOOOOO GOOD MORNINGGGG I JUST FOUND OUT SANA AND MOMO DANCED DYNAMITE ON THEIR VLIVE AND OMG MY ARMYONCE HEART IS SOOOOO HAPPYYYYY AND OMG LOOK!!! MY DELULU SAKOOK HEART IS ALIVE TOOOO HAHHHAHAHA pic.twitter.com/cO9bV38mGF

nayeon is going to wake up and find out sana and momo danced to dynamite without her  pic.twitter.com/LD9TY4TIBe

and when nayeon posts about feeling betrayed that sana and momo danced to dynamite without her. we’ll get all the girls together and do it again.pic.twitter.com/1xB2X44sO9

momo and sana, from TWICE, dancing to bts’s dynamite. I can already imagine nayeon cheering on and singing along to dynamitepic.twitter.com/KQziJlMgI6

Finally Momo dance it live this what we really want to see but..where’s nayeon  imagine nayeon wake up this morning and found out that Momo dancing to dynamite without her n she will be like WAE!! WAEYOO!!
pic.twitter.com/9jiBmpA26c

What did you think of the performance? Let us know your thoughts in the comments below. Dynamite was BTS’s first all-English track and it took the music charts by storm. The track debuted on the top spot of Billboard Hot 100. The track not only helped BTS shatter records, but it also helped the group to bag their first Grammy nomination. The septet is up for Best Pop Duo/Group Performance.