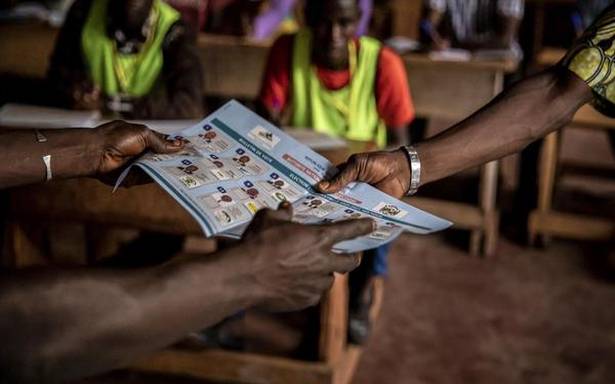 The diamond- and gold-rich nation of 4.7 million has struggled to stabilise due to a successive waves of militia violence since 2013 .

More than 14% of polling stations in the Central African Republic failed to operate during Sunday’s presidential and legislative election due to armed rebels who attacked voters and barred electoral staff, the electoral commission said on Monday.

Around 800 out of a total 5,408 nationwide polling stations did not open, Theophile Momokouama, an executive of the electoral authority, told a news conference in Bangui.

“There were localities where voters were brutalized,threatened with death. The electoral staff were forbidden to deploy on the ground,” Momokouama said.

The diamond- and gold-rich nation of 4.7 million has struggled to stabilise due to a successive waves of militia violence since 2013 that have killed thousands and forced more than a million from their homes.

“As of today, we do not know the proportion of Central Africans who were able to vote,” Momokouama said.

Momokouama said the commission was waiting for results from regions for collation. The commission would then forward the provisional results to the constitutional court which will publish them.

The election campaign was marred by threats from armed rebel groups that vowed to march on the capital and disrupt the vote after several candidates, including former President Francois Bozize, were barred from running.

Security forces, helped by more than 12,000 U.N. peacekeepers, and reinforcement from partners Russia and Rwanda, managed to fend off attacks in the capital and some towns, but rebels were able to stop the vote in some areas of a sparsely populated country larger than France.

Security Minister Henri Wanzet-Linguissara told the news conference that some rebel groups were aided by foreign mercenaries, enabling them to take control of some towns.

In Bouar, around 435 km (270 miles) northwest of the capital where heavy gunfire prevented voting, terrified residents were still hiding in their homes on Monday.

“The armed groups are still near the town. Yesterday it was very difficult for us. We couldn’t vote. They ransacked polling stations. For now the city is almost empty,” a resident said by phone.