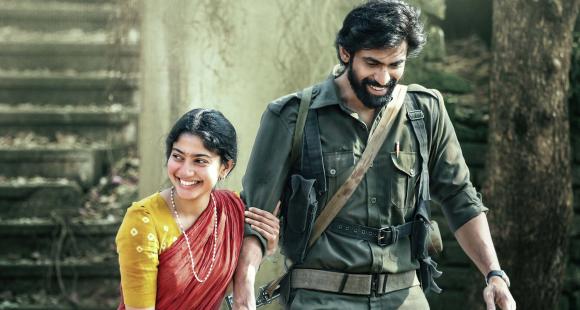 Rana Daggubati”s upcoming film Viraata Parvam, co-starring Sai Pallavi is all set to hit screens this summer 2021. Directed by Venu Udugula, the film is currently in the post-production stage. Meanwhile, Rana has shared a new poster from the film that has grabbed everyone’s attention. One can see, Sai Pallavi is looking cute and beautiful as always in a red saree as she holds Rana Daggubati’s hand who is dressed up as a Naxalite. Sharing the new poster ahead of Sankranthi, the Baahubali actor writes, “Happy Sankranthi everyone!! #Viraataparvam moves into post-production and will be in cinemas this summer!!”

While Rana Daggubati plays a Naxalite in the film, reportedly, Sai Pallavi’s role is inspired by real-life singer-activist Belli Lalitha. However, the makers have kept everything about her role in the film under wraps. Viraata Parvam also stars Tabu, Priyamani, Eswari Rao and Zareena Wahab in supporting roles with Nandita Das making a comeback to Tollywood film industry. The film has been the talk of the town since inception and fans can’t keep calm to know what’s next in the store.

Sai Pallavi, on the other hand, will be seen opposite Naga Chaitanya in their upcoming Telugu film titled, Love Story. The teaser of the film was released recently and it has set high expectations among the moviegoers.