Viral Kentucky YouTuber nearly dies when .50-cal gun blows up in his face on camera 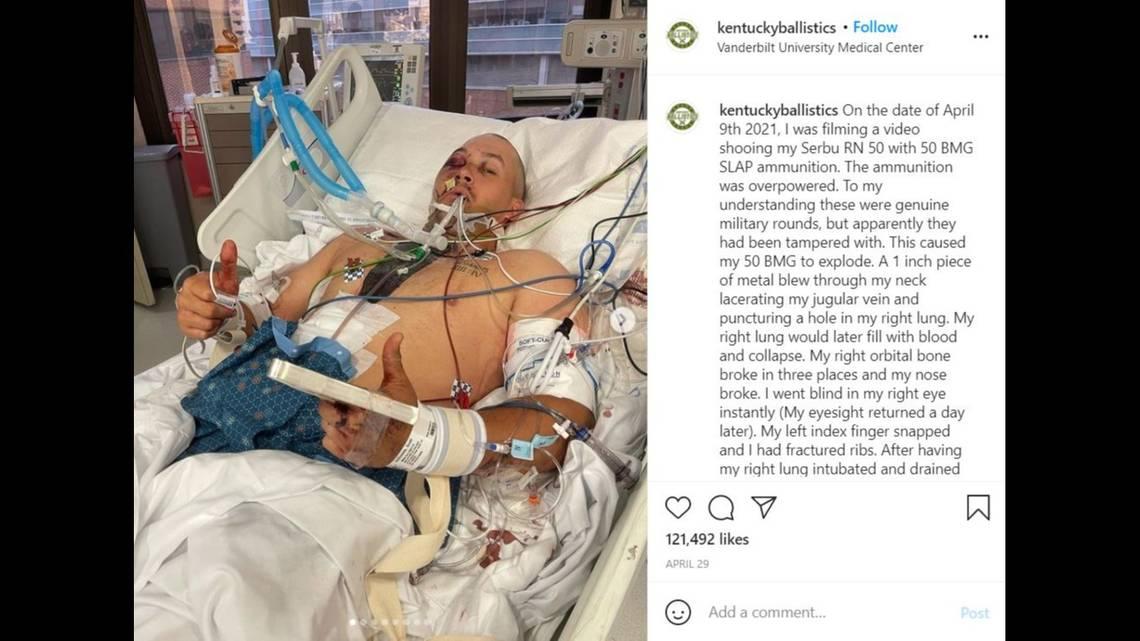 Scott DeShields was shooting a fire hydrant — which was set up at the end of his gun range — with a Serbu RN-50, a .50-caliber rifle, when the gun exploded. Pieces punctured his throat and hit him in the eye, he said.

DeShields is the owner of the Kentucky Ballistics YouTube page, an account that posts videos about guns and ammunition. It’s nearing 2 million subscribers. His other social media pages also have large followings.

“I shouldn’t be standing here, I should be 6-foot under,” DeShields said while explaining the April explosion and subsequent injuries in a recent YouTube video.

DeShields was using “SLAP” rounds, high-power ammunition that isn’t made anymore and is expensive to buy, he said. The SLAP rounds were powerful enough to go through the fire hydrant and exit the other side.

“Everything was going pretty smooth,” he said. “We shot the fire hydrant several times, but the SLAP rounds were acting a little funny. One of the slap rounds hit like a foot and a half low and to the right.”

DeShields decided he was going to fire one more SLAP round but “aim for the thickest part of the fire hydrant and see what happens.” The gun exploded in his face. DeShields said the round was “very hot.”

DeShields said that as he was loading the last SLAP round into the gun, everything was “functioning as normal.” But DeShields believes the ammunition may have been tampered with.

“When I pulled the trigger, the gun exploded almost immediately,” he said.

There are two “ears” on one piece of the gun. They stick up and are intended to keep users from closing the gun without everything properly in place once it’s loaded. But a steel cap blew off the gun once it was fired and knocked the ears off. One of the one-inch metal ears zipped along the side of DeShields’ head and tore a hole through his hat.

The other “ear” did a lot more damage. It blasted into his throat, lacerated his jugular vein and punctured a hole in his right lung.

The steel cap on the gun, which sheared the “ears” off, hit DeShields in the face. Even though he wore safety glasses, the cap broke his orbital bone and his nose.

“I’ve had to have facial surgery to repair all this,” he said, pointing to several wounds on his face.

DeShields also said he instantly went blind in his right eye when the cap hit him.

“I have vision coming back now and they say my eye should make a full recovery,” he said.

The stock of the gun did damage, too. As it came loose from the rest of the gun, the stock smashed into his hand and made his left index finger look “like a W.”

DeShields’ father, who is also named Scott, was recording the Kentucky Ballistics video when the gun exploded.

“If he had not been out here with me, that would’ve been it for me,” DeShields said.

DeShields said he was “in a daze” when the explosion happened, and his father let him know what was wrong. DeShields was losing a lot of blood from the wound in his throat. He wrapped his thumb in his shirt and used it to try to “plug the hole.”

DeShields’ father drove into town with DeShields in the passenger side of a pickup truck. DeShields called 911 and dispatchers sent an ambulance to meet them. He was worried he was going to pass out, stop applying pressure to the hole in his throat, and die.

“Times like this, you really need something to focus on, and I focused on my kids. I had their faces in my brain and I just focused on them,” he said. He stayed conscious while an ambulance got him to the hospital.

In the trauma unit with a lung full of blood

DeShields said his right lung collapsed because it was full of blood. Hospital officials intubated him while he was still awake.

Eventually, DeShields was flown to Vanderbilt University Medical Center in Nashville where he was “hooked up to every machine possible.”

Doctors cut open his chest and pinched off his jugular vein to repair that and his lung, he said, putting him at risk of a stroke. He required five units of blood after the initial injury and the surgeries.

DeShields said his nurse brought him a dry erase board, so he could write what he wanted to say to his wife. The nurse relayed the information to his wife.

DeShields left the trauma unit after a few days, he said.

He said he was recovering fast, and he planned to keep making videos. He had some different content planned until he fully recovers and starts shooting again. He has posted a few videos since the accident.

“There’s nothing that can keep me from continuing on,” he said.