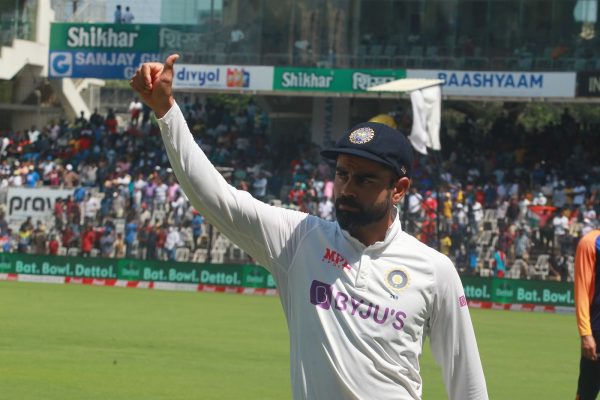 Team India skipper Virat Kohli has equaled former skipper MS Dhoni’s Test captaincy record after beating England by 317 runs in the 2nd Test at the MA Chidambaram Stadium in Chennai. With this win, India level terms in the four-match series.

Coming from a shocking defeat, India set the records right from the start of the play. Rohit Sharma started the proceedings well with a brilliant hundred well-supported by Ajinkya Rahane, followed by Ravichandran Ashwin’s five-wicket haul while debutant Axar Patel scalped two wickets.

After bowling out England for 134 runs, it was moments India seal the match. After his brilliance with the ball, Ashwin showed his batting prowess with a brilliant century while Virat Kohli looked in soothing touch during his 62-run knock.

Setting up a target of 482 runs, Axar Patel ran down England’s batting with a fifer while Ravichandran Ashwin scalped three followed by Kuldeep Yadav’s two to set up a massive 317-run win. With this victory, Virat Kohli has now 21 Test wins under his belt out of the 28 Tests that he has captained in India.

MS Dhoni has also won 21 Tests out of 30 Tests he has captained India and it is only a matter of time till Kohli goes past the legendary Dhoni. Kohli has lost just two Tests so far in his campaign as captain at home while Dhoni had lost three Tests at home in his captaincy career.

Meanwhile, with this win, India keep their hopes alive of making it to the finals of the ICC World Test Championship and set a date with New Zealand, who have already booked a berth. They need to win their last two matches or at least win one and draw the other to sail past England and Australia to make it to the summit clash scheduled to take place in England later this year.

X
IPL 2021 Auction: Haven’t Paid Too Much Attention To It – Kyle Jamie…CricketNew Zealand pacer, Kyle Jamieson will be up for grabs in the IPL 2021 auction on Thursday (February 18). Jamieson has had an astronomical rise in inte…
close