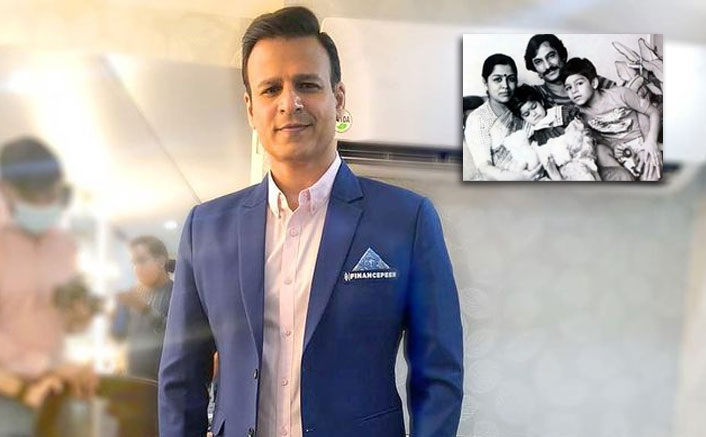 Actor Vivek Anand Oberoi on Sunday went down memory lane and tweeted his family photo. As a child, he used to find sitting on the lap of his father and actor Suresh Oberoi, the most blissful place.

The black and white photo features him with his parents and sister.

“Sitting on Dad’s lap – the most blissful place in the world. Sharing the frame are the two most beautiful women who are my source of inspiration and unshakeable strength! Love you all to the moon and back!
Koi lauta de mujhe bachpan ke din!
#ChildhoodMemories
#Throwback,” Vivek tweeted.

On the work front, Vivek last starred in the 2019 film “PM Narendra Modi”.

He will be seen in the horror flick “Rosie: The Saffron Chapter”, which is said to be based on true events that happened in Gurugram. He also has whodunit thriller film “Iti: Can You Solve Your Own Murder?” in his kitty.

Meanwhile, the Shaad Ali-directed Saathiya was released 18 years ago on this day. Actor Vivek Oberoi says the film is still relevant today and is close to his heart.

Saathiya co-starred Vivek with Rani Mukerji, and the film revolves around Aditya and Suhani who elope after their parents oppose their love story. However, rifts begin to develop in their romance.

Talking about the film, Vivek Oberoi said: “Saathiya has always been so close to my heart! It’s an evergreen film and feels so relevant even almost two decades later… still connects straight to the heart! And at the heart of the film is its incredible music that makes you smile every time you hear it.”

Vivek Oberoi reminisced about his fondest moments from the film.

The actor said: “The film unit was like our own little family, so many happy memories come to mind! My ‘chaddi buddy’ literally, Shaad Ali, made his debut as a director and we had some crazy emotional times! A major highlight for me was in the middle of our shoot in April 2002, the company released and became a massive success.”