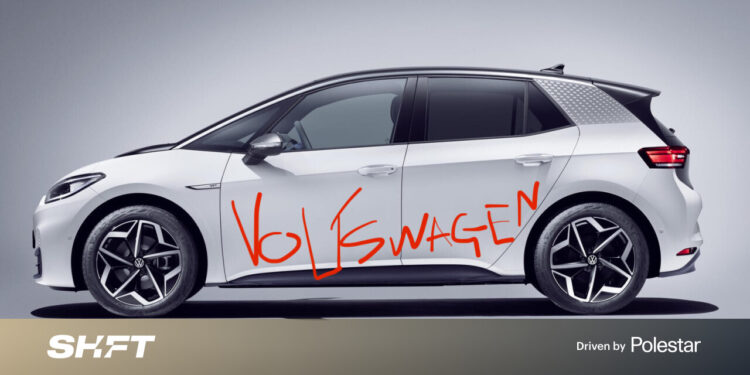 It seems VW of America is a little jealous about Tesla’s S3XY CARS meme, and supposed sense of humor. So much so, it’s committed the greatest atrocity of them all, and coming up with lame dad jokes.

What’s worse though, is they STOLE it, from ME!

According to Car and Driver, VW of America posted a press release announcing that it’s changing its name to Voltswagen, to make itself appear more EV friendly.

The post has since been removed, and it looks nothing more than perhaps a premature April Fool’s day gaff. Even though it was allegedly confirmed to CNBC.

But the biggest atrocity is they stole the joke from me. I’m pretty sure of that.

Nearly a year ago, after sharing the news that VW was focusing on EV production at its Zwickau plant in our company Slack, I suggested that it was high time that VW change its name to Voltswagen.

Ok, ok. Sure, I know. It’s kind of obvious. But still, I feel like I deserve some kind of royalty — even though I only said it in a private Slack channel that VW had no access to. I mean, c’mon.

Although, as it turns out, VW has used this wording before. Not in relation to a full rebrand and name change as I suggested, but in an advert for its e-up! electric hatch. Kudos to Sebastian Blanco for spotting this one.

I’ve posted this elsewhere, but just so we’re all clear, the #Voltswagen name (which seems to be real, despite 4/1 fast approaching) is not exactly new. See this @VW ad from 2013 in Oslo, for example: pic.twitter.com/sT0PzDTY4P

I’ve never seen this advert before, so I’m still claiming the intellectual creative rights to suggesting VW changes its name and rebrands to Voltswagen.

We shouldn’t pay any attention to VW’s car adverts anyway. It once called a car a Lemon. It clearly has no idea what it’s talking about.

Do EVs excite your electrons? Do ebikes get your wheels spinning? Do self-driving cars get you all charged up?