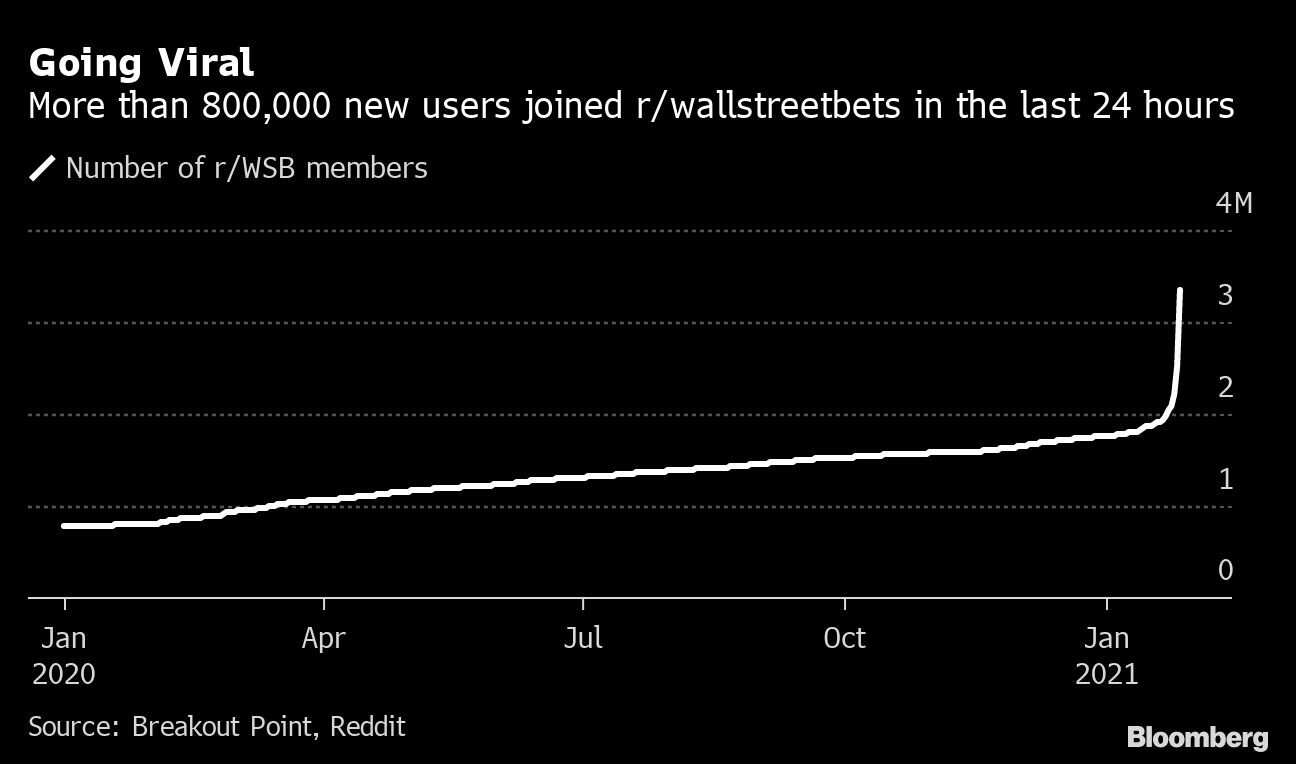 (Bloomberg) — WallStreetBets, the internet forum fueling a frenzy of retail trading, briefly turned itself off to new users Wednesday after a deluge of new participants raised concerns about its ability to police content, a notice on the website said.

The WallStreetBets home page was closed to all users for a little over an hour Wednesday evening in New York. A message on the site shortly after 6:30 p.m. in New York said it was experiencing technical difficulties due to a flood of new members, rendering moderators “unable to ensure Reddit’s content policy.”

An hour later, the forum returned to business as usual, with the moderators pinning a post that said its rapid growth had made oversight difficult. The site had racked up more than 3 million members as day traders plugged companies from GameStop Corp. to AMC Entertainment Holdings Inc., driving massive rallies that have burned hedge funds who had sold the stocks short.

In a related drama that unfolded at the same time, communications platform Discord banned WallStreetBets for allowing “hateful and discriminatory content after repeated warnings,” according to a representative. While far smaller in scope, the move evoked similar bans by tech firms for policy violations including former President Donald Trump’s removal from Twitter and Amazon.com’s AWS’s removal of social media site Parler from its servers.

Reaction to the brief outage at WallStreetBets was swift and painful in stocks favored by the site. GameStop, up fivefold in three days, tumbled as much as 37% before paring the loss. AMC, which doubled in Wednesday’s cash session, sank more than 50% at one point before cutting that in half. Nokia, the one-time cell-phone giant that added 38% in regular trading, gave up more than a third of that before recovering to trade lower by 6%.

Broader stock gauges seemed unperturbed by the commotion. Futures on the Nasdaq 100 Index remained lower by about 0.4%, weighed down by Tesla Inc.’s poor earnings report and middling results at Apple Inc. and Facebook Inc.

Senator Elizabeth Warren weighed in, saying she intends to make sure securities regulators “wake up and do their jobs.” Not long after, the Securities and Exchange Commision said it is “actively monitoring” volatility in options and equities markets.

New followers began flooding copycat message boards on Reddit almost immediately. A forum calling itself WallStreetBetsNew, which was founded last year, ballooned to nearly 200,000 users, from about 71,000 earlier in the day.