WandaVision wasn’t supposed to be the first Marvel series on Disney+, and it shows.

Grafted to a premise more suited to the syndicated sitcoms on TV Land than the home of The Mandalorian, the Elizabeth Olsen and Paul Bettany starrer that debuts tomorrow on the streamer is mainly a baby boomer punchline in search of a joke. Which, based on the three episodes that the House of Mouse provided, is another way of saying the Jac Schaeffer created limited series is well within the wheelhouse of the endless set-up of the Kevin Feige-run Marvel Cinematic Universe, and not in a good way.

Now, with two Matt Shakman directed episodes dropping on January 15 and the rest to follow weekly until March 5, it’s early days for WandaVision. Perhaps the promised and hyped payoff will be worth it and this won’t be end up being an indulgent retooling of Three’s Company, Who’s The Boss, and Moonlighting.

Otherwise, despite some fun performances, Stark Industries cameos, and a hefty homage to past generations of television, it’s tiresome. More galling, the augury so far prognosticates another blatant example of a corporate machine in motion where storytelling should be seeded. Still, regardless of what critics wring their hands about or not, fans will perform their expected duty and sign up as Disney+ subscribers – which is the true Wall Street aimed desire here.

Coming off a big screen drought since omnibuster Avengers: Endgame, plus more than a year after Disney+ launched and with all the Covid-19 induced delays keeping the likes of Black Widow on the shelf, the thirst right now for more Marvel is strong. 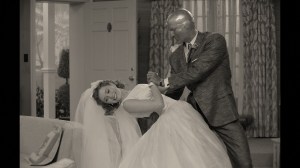 Drawing from the 2019 Russo brothers helmed flick and amalgamating at least two comic sagas with the Scarlet Witch and Vision characters, WandaVision transports the cooing couple of Olsen’s Wanda Maximoff and Bettany’s caped android to suburban bliss, sort of.

Looming over it all is that Vision was still dead when Endgame ended. So, amidst the literally and figurative architecture of The Dick Van Dyke Show, Bewitched and The Brady Bunch, it seeps out pretty quickly that all is not well in the land of picket fences and cul-de-sacs – as one would expect.

For all its flights of fancy and cultural references, WandaVision breaks no new ground and at times, seems to move backwards in the Marvel small screen legacy. 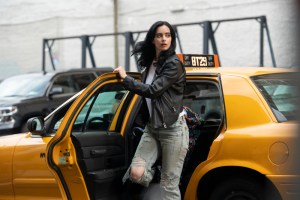 The show lacks having learned any lessons from the urban underbelly and maturity of Netflix’s now shuttered Marvel series like Jessica Jones, Luke Cage, and to a lesser extent, Daredevil. Even the Marvel TV O.G. of Agents of S.H.I.E.L.D. did this kind of stuff way better with the limitations of being on a broadcast network like ABC.

Planted in the PG-13 galaxy of Disney+ and fueled by Feige’s self-publicized love of old school sitcoms, WandaVision tastes like small screen white bread sprinkled with sugar. All of which isn’t much to chew on, and leaves the visually impressive limited series as little more than an opening course for the forthcoming The Falcon and the Winter Solider, Hawkeye, Ms. Marvel and the teased wicked whimsy of Loki.

After all of the billions and billions of dollars in box office that Marvel has made over the past 12 years, it may seem almost impossible to recall the number of times they’ve gotten it wrong before. As a tried and true fanboy, let me help you out – there’s the incoherent Iron Man 3, the insulting first season of Iron Fist, the horrible Inhumans and the second Thor movie. Now, in a preliminary pass at least, WandaVision is on that tainted list.

Having said all that and avoiding spoilers, WandaVision does have some magic up its sleeve.

Despite being stuck with creaky material that will primarily land with the AARP crowd, Olsen and Manhunt: Unabomber vet Bettany turn out to be quite wonderful comic actors with precise timing around the tropes. The former already established her talents in the genre in the likes of 2017’s Ingrid Goes West and the latter brings his best Hugh Laurie to WandaVision.

New to the MCU and rarely less than super, Transparent alum Kathryn Hahn is a delightful stereotype as boozy and disgruntled neighbor Agnes, who befriends Wanda, we think.

Not really beamed in until the third episode, Teyonah Parris’ Monica Rambeau is the most obvious connection to Captain Marvel and more of the upcoming Phase Four as the aperture of WandaVision begins to open up a third of the way through its run. With all the Easter Eggs on display in the first trio of WandaVision episodes, those other announced Marvel participants Kat Dennings and Randall Park don’t make appearances in the opening round.

At one point, in the first three episodes, WandaVision asks itself “is this really happening?”

Existential narratives aside, yes true believers it is.

In the words of Johnny Rotten at the last Sex Pistols show with a drug addled Sid Vicious: “ever get the feeling you’ve been cheated?”