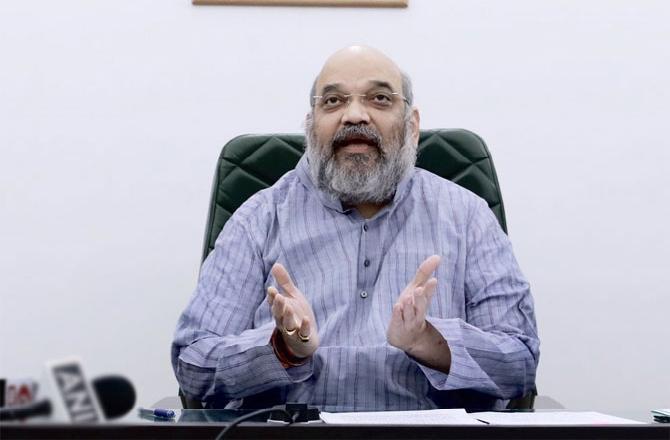 Union Home Minister Amit Shah on Sunday said that the BJP wanted to liberate Hyderabad from the ‘Nawab Nizam’ culture and develop it as a modern city.

Addressing a news conference at the end of his day-long visit to campaign for Greater Hyderabad Municipal Corporation (GHMC) elections slated to be held on December 1, he said that the BJP also wanted to take Telangana and Hyderabad from “dynasty to democracy”.

Shah said that the BJP wanted to take Hyderabad from corruption to transparency and from appeasement to equal opportunities. “I want to assure large section of people in Hyderabad who feel insulted that nobody will dare to treat you as second-class citizens,” he said.

He said that it was because of Sardar Patel that Telangana, Marathwada, and Hyderabad became part of India. He said there were some people who ran a campaign to merge these with Pakistan.

“Owaisi should respond as to who talked of merging Telangana with Pakistan,” he remarked when asked to comment on MIM chief Asaduddin Owaisi’s allegation that the BJP was dividing people.

On Hyderabad MP’s question what was Shah doing when the Rohingyas, Pakistanis and Bangladeshis were illegally staying in Hyderabad, the Union Home Minister asked him to give in writing to deport them.

“When we take action, they raise hue and cry. Didn’t you see in Parliament? Let them give in writing that the Rohingyas and Bangladeshis be deported. Merely speaking in elections will not work. Who take their side when we talk of deporting them? People know. They have seen it live on television,” he said

Asserting that the BJP has no problem with TRS aligning with MIM, Shah dared Chief Minister K Chandrasekhar Rao to openly have seat-sharing with MIM. “In a democracy, any party can tie up with anyone. But why this secret understanding? Why don’t you have the courage to openly say that you have electoral understanding with MIM.”

Claiming that the BJP has become main opposition in Telangana, Shah said that in the next Assembly elections the BJP would definitely form the government.

He remarked that KCR was also “helping BJP in this task by the manner in which he is running the government”.

He found fault with TRS for calling GHMC polls a ‘gully election’. He also brushed aside the criticism over campaigning by central Ministers and top BJP leaders for the MC polls. He said that the BJP did not treat any election as small and it contested municipal elections in many cities.

Appealing to the people to give a chance to BJP, Shah promised to ensure good governance by checking corruption.

He said that Hyderabad’s infrastructure would be improved to make it a global hub of information technology. He said the BJP would also make the city flood-proof.

The BJP leader also slammed TRS government for its handling of recent floods in Hyderabad. He alleged that the Chief Minister did not visit any flood-affected area.

He also denied the TRS allegations that the Centre failed to provide any funds to Hyderabad. “Since KCR doesn’t come to Secretariat, he doesn’t know the figures,” he quipped.

On his visit to Bhagyalakshmi temple earlier in the day, Shah said he went there out of personal devotion and stated that there was no need to give it any other meaning.

Shah called KCR’s opposition to new central farm laws as “politically motivated”. He claimed that the new laws were in the interests of farmers.

Asked about KCR’s plans to forge an alliance against the BJP, Shah remarked that he has always been trying it in the past. “He tried this in 2019 but his seats were reduced to half. Mamata Banerjee also tried. Her seats too reduced to half.”