Washington Sundar Wants To Follow Ravi Shastri’s Footstep: I Will Accept The Challenge Just Like Our Coach Ravi Sir 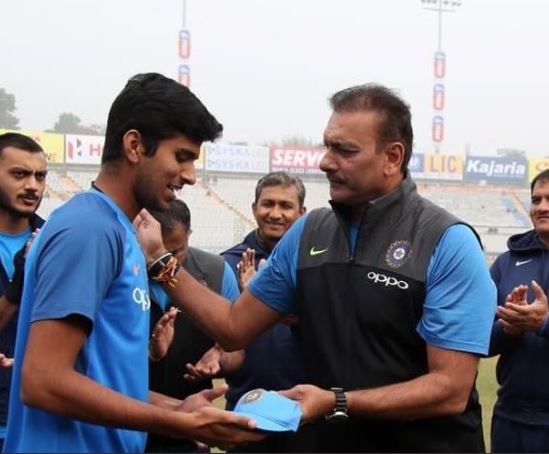 The spin bowling allrounder Washington Sundar, who was one of the significant contributors to India’s historic triumph in The Gabba, has revealed that he wants to follow the footsteps of India’s head coach Ravi Shastri in his cricket career.

After the completion of the white ball series against Australia, Washington Sundar was retained as the net bowler for the four-match Test series. But fortunately, he got the opportunity to play the debut Test match as India’s regular spinners Ravichandran Ashwin and Ravindra Jadeja sustained injuries. The duo were ruled out of the injury for the fourth Test.

Washington Sundar was given his Test debut cap in Brisbane. He went on to impress both with bat and ball. After picking three wickets in the first innings, he scored a stunning half-century which cut short Australia’s mammoth lead. His gritty knock instilled hope in India’s camp and eventually, the visitors retained the trophy.

I would love to open the batting in Tests like Ravi Shastri: Washington Sundar

Speaking to PTI, Washington Sundar said that he is ready to take any opportunity and challenge given to him even if asked to open the batting for India in the Tests. He stated that he would accept the challenges like Ravi Shastri did during his playing days.

“I think it will be a blessing for me if I ever get an opportunity to open the batting for India in Tests. I think I will accept the challenge just like our coach Ravi sir did during his playing days,” Washington told PTI.

Sundar revealed that the current Indian head coach, who was also a part of the World Cup 1983 triumph, inspires the youngsters a lot with his cricket journey. Shastri was also earlier a number 10 batsman but he capitalise every opportunity thrown to him and finally, he went on to become an opening batsman for India.

“Ravi sir tells us very inspiring stories from his playing days. Like how he made his debut as a specialist spinner, got four wickets and batted at number 10 against New Zealand.”

“And how from there, he became a Test opener and played all those great fast bowlers. I would love to open the batting in Tests like him,” said Washington Sundar said.

After his heroic in Australia, Washington Sundar has also been named in the Test squad for the first two Tests against England which will be played in Chennai.