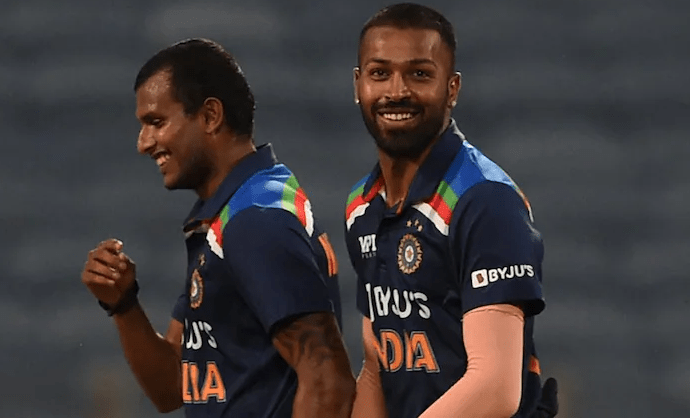 Indian all-rounder Hardik Pandya was a relieved man when Shikhar Dhawan held onto the catch in the deep to dismiss Ben Stokes. This happened in the 11th over of the England innings when Stokes was dismissed. Stokes’s wicket was a big blow to England’s chances of winning the decider. India posted a more than competitive 329 after being put into bat first.

Chasing total England lost their openers early this time around which brought Ben Stokes into bat early. He started well and got a let-off early on in his innings. Hardik Pandya dropped the England all-rounder off the bowling off Bhuvneshwar Kumar.

However, India did not have to pay too big a price as T Natarajan dismissed the southpaw as Dhawan completed an easy catch. Dhawan holding onto the catch was a big relief for Hardik who earlier dropped a sitter to give Stokes an early life. However, despite getting a life, Ben Stokes could not cash in on the opportunity this time around. He was finally dismissed for 35 off 39 balls.

Before coming onto the field, Hardik scored 64 off 44 balls and in the process added a stand of 99 runs in quick time. The partnership provided momentum to the Indian innings after India lost four quick wickets. Both the batsmen got to their respective half-centuries but got out at the wrong time. Shardul Thakur hit a quickfire 30 but India lost wickets at regular intervals, losing their last 6 for just 74 runs.

Rohit Sharma and Dhawan added a 103 run stand after which India lost four wickets in a space of 50 runs. Indian skipper Virat Kohli was dismissed for the ninth time in international cricket by Moeen Ali after Adil Rashid dismissed the openers after a daunting partnership. India lost their last four wickets for just 8 runs.