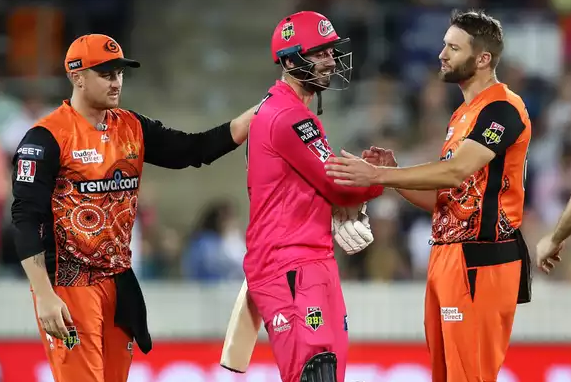 Sydney Sixers opener James Vince was left stranded on 98 as his knock took the team to their second successive BBL final. The Perth Scorchers will meanwhile, play the winner of the Knockout between Brisbane Heat or Sydney Thunder. The match is on Thursday (February 4) at the Optus Stadium in Perth. Sydney Sixers meanwhile will wait for the other finalist at the SCG. The Sixers won the game by nine wickets in a masterful chase.

James Vince’s 98 shaped up a brilliant win for the Sixers against the Scorchers at the Manuka Oval in Canberra. Chasing 168 to win, Vince’s unbeaten 98 was decorated by 14 fours and a six in his 53 ball knock. Interestingly, Daniel Hughes (21) who came into bat at number three after the fall of the first wicket blocked the entire 19th over to allow Vince to get to his 100.

However, an even more interesting thing happened in the first ball of the final over. Andrew Tye came into bowl with just one run needed for the Sixers to win the game. Tye bowled a wide down the leg side leaving Vince stranded on 98 which became the talking point in the game.

Dan Hughes blocked out the end of the 19th over so James Vince could make a hundred.

Former England skipper Michael Vaughan said that Tye purposefully bowled a wide to deny Vince get to his landmark and that it was a poor show of sportsmanship from the Aussie quick.

“No one can tell me that he didn’t mean to do that … !! Poor form from AJ Tye …” wrote Vaughan on his Twitter handle.

No one can tell me that he didn’t mean to do that … !! Poor form from AJ Tye … https://t.co/xuIFCdRlvk

Meanwhile, earlier in the game, opting to bat first, the Perth Scorchers ended up with 167 for 6, riding on Josh Inglis’ 69 not out and captain Ashton Turner’s 33. In reply, Josh Phillipe’s attacking 45 took the Sixers off to a flyer before Vince’s 53-ball 98*, laced with 14 fours and 1 six, took his side home with three overs to spare. The Sixers have now also qualified for the BBL 2020-21 edition’s final.