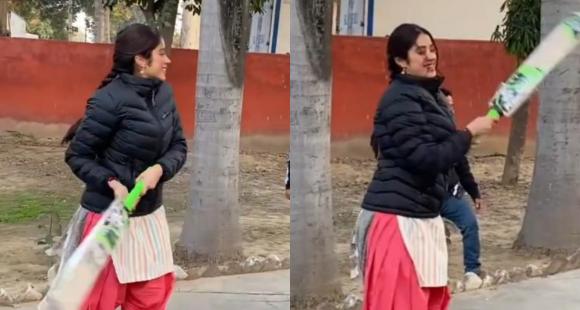 On Saturday, Janhvi Kapoor took to Instagram to share a video from the sets of the film in which she can be seen playing cricket. Check out the fun video below.

Janhvi Kapoor took to Instagram earlier this month to announce her next film Good Luck Jerry with director Aanand L Rai. The film”s shooting kicked off this month in Chandigarh and ever since has been making headlines for various reasons. From Janhvi’s look in the film to fan photos of the actress being spotted, social media has been buzzing with the same. Recently, the shoot also came to a halt due to the farmer’s protests.

On Saturday, Janhvi took to Instagram to share a video from the sets of the film in which she can be seen playing cricket. The actress can be seen dressed in her character’s outfit coupled with a thick winter jacket to keep herself warm. In the video, Janhvi can be seen batting as she hits every ball thrown at her by her crew member barring the first ball.

Sharing the same, Janhvi captioned the video, “Is it safe to say I became a pro.” Check out Janhvi Kapoor’s video below:

Janhvi’s first look from Good Luck Jerry was released on social media a few weeks ago. The actress, however, was recently snapped in Chandigarh on set and we got a closer look at her girl-next-door look. In the photos, Janhvi can be seen clad in a silver puffer jacket, a salwar-kameez with her neatly tied in a braid and a bindi to add some old school charm to her character.

Want to check out Janhvi’s on set pictures? Click on the link below.