Home EntertainmentGossips WATCH: Karan Johar wishes the ‘loves of his life’ Yash and Roohi on their birthday and they roast him as usual

WATCH: Karan Johar wishes the ‘loves of his life’ Yash and Roohi on their birthday and they roast him as usual 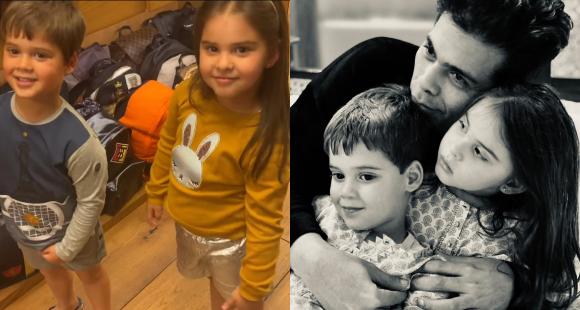 On and Yash and Roohi Johar’s 4th birthday, Karan Johar shared a hilarious video of his adorable twins roasting him while he wished them.

WATCH: Karan Johar wishes the ‘loves of his life’ Yash and Roohi on their birthday and they roast him as usual.

Karan Johar is not just one of the top producers and filmmaker in Bollywood, but also a doting father. On Sunday, he took to social media to wish his adorable twins, Yash and Roohi, on their birthday as they turned four. If you haven”t forgotten, through the lockdown, Karan had kept millions of his fans and followers hooked to the gram as he shared Yash and Roohi’s hilarious lockdown chronicles.

Today, in similar style, Karan shared another video from his closet with Yash and Roohi critiquing his fashion sense as he wished them. Calling them the ‘loves of his life’, Karan’s video was all things hilarious as his twins called his fashion sense ‘Yuck’ and ‘Shiny’. The video is too cute to be missed and melted the hearts of his fans and followers.

In the video, we get to see Yash playing around with his dad’s sweatshirts as his hand gets stuck in one. The twins also adorably say ‘toodles’ towards the end of the video. The doting dad captioned it, “A birthday toodles is a must! The fashion critics are back to roast me! Happy birthday to the loves of my life! #roohiandyash.”

Check out Karan Johar’s heartwarming wish for Yash and Roohi:

ALSO READ: PHOTOS: Karan Johar turns heads with his all black ensemble but asks you to ‘stop staring’