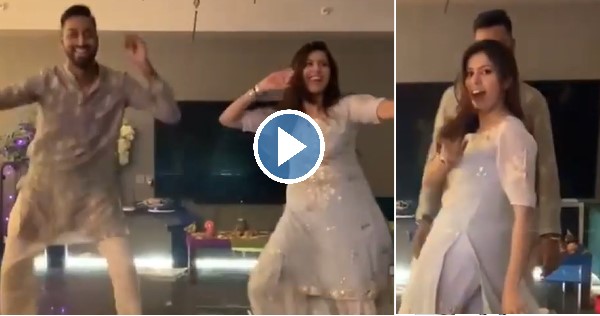 Baroda all-rounder Krunal Pandya has earned to the national team for the three-match ODI series against England starting from March 23 in Pune. Meanwhile, one day prior to the team selection, the cricketer shared a throwback video of his and his wife – Pankhuri Sharma dancing to a famous Bollywood number.

The All-India National Selection committee headed by former cricketer Chetan Sharma announced an 18-member squad for the ODI series. Suryakumar Yadav and Prasidh Krishna earned debut calls while Krunal Pandya was recalled to the limited-overs squad as Ravindra Jadeja continues to nurse the injury he suffered during the Test series against Australia.

Krunal, who has represented India in 18 T20Is, will finally gear up for his ODI debut after a rollicking season for Baroda in the Vijay Hazare Trophy 2021 edition. The swashbuckling left-hander amassed two big hundreds, two fifties and accounted for five wickets in the tournament, and was rewarded with a place in the ODI setup.

While the squad news came on March 19, Krunal Pandya was in celebratory mode as a throwback video of him dancing with his wife, Pankhurii Sharma, has now gone viral. The video was shared by Krunal from his official Instagram handle, where he can be seen dancing to Bollywood’s popular track ‘Kajra re’.

“What makes us happy? Dancing together (And me trying to mimic @pankhuriisharma’s steps) #ThrowbackThursday,” Krunal Pandya captioned the post.

Krunal Pandya last represented India, in the shortest format, during the three-match T20I series versus Bangladesh at home in late 2019. Since then, he was out of contention and now will look to make the most out of the opportunity in the upcoming series followed by IPL 2021 with ICC T20 World Cup looming large later this year in India.