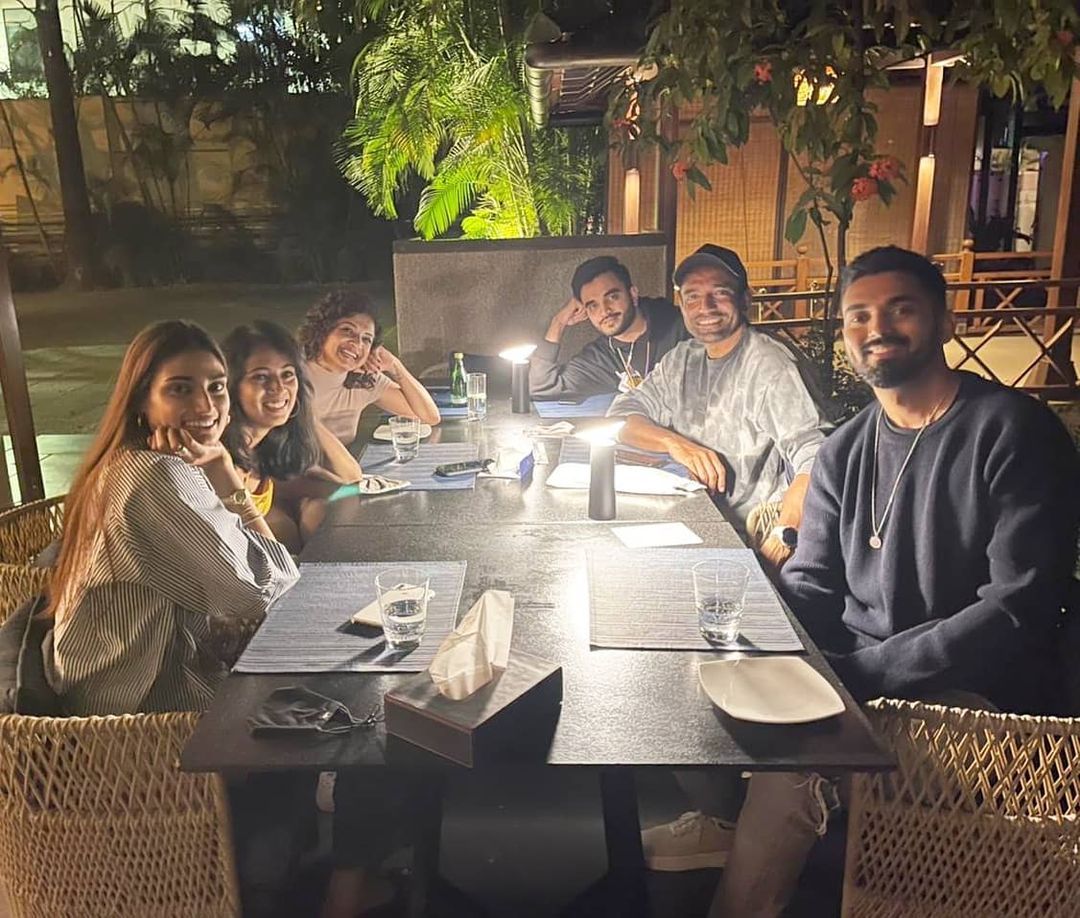 Indian cricketer KL Rahul and his rumored girlfriend Athiya Shetty was snapped together as they went out on a dinner date with Robin Uthappa and his wife Shheethal. Rahul is enjoying some quality time off the field before he joins the Indian team for the England series. He has been named in the Indian squad for the first two Tests against England to be played in Chennai. Meanwhile, Uthappa is news these days after he was transferred to Chennai Super Kings from Rajasthan Royals in an all-cash-deal.

The photos of all four of them have been ruling the internet. In the photos, Athiya and Rahul can be seen sitting with Shhethal, Robin, Sinan Kader and a few others. While Athiya was seen donning a striped shirt, Rahul was seen sporting a black sweatshirt.

While sharing the photos, Robin’s wife wrote, “I’v grown up having the most amazing friends who have been my family from the very beginning .. and so blessed to have that family growing at every stage of life #friendswhoarefamily #love #grateful. (sic)”. You can see the photos below.

KL Rahul is a man on a mission after missing out the Australia series with an injury. He was not picked in the playing XI for the first Test, while he was fit. While he was expected to be picked in the second Test, he injured himself in the wrists at practice.

Despite not playing the Australia Tests, he will be a part of the squad which went to Australia and won a Test series in their own backyard. He played the ODI and T20I series before the Tests began.

Meanwhile, the BCCI has announced a full-strength squad for the upcoming England series starting from February 05. England will tour India between February 5 to March 28 for four Tests, five T20Is and three ODIs. Chennai will host the first two Tests. The third Test in Ahmedabad will be a day-night Test match between both teams. The final two Tests will be played at the newly built stadium in Ahmedabad. The five T20Is will be played in Pune followed by the three ODIs. in Ahmedabad again to round-up the series.

Also Read: India vs England 2021 Series To Be Played At Three Venues

X
Shubman Gill Has A Glitch In Technique Points Out Ian Bishop…CricketShubman Gill, young Indian opener had a successful debut Test series versus Australia, where he was 4th highest run-scorer for India as he returned wi…
close