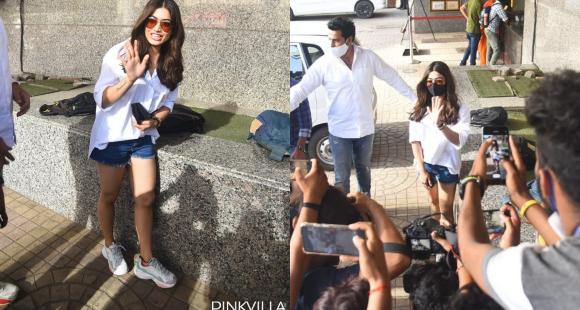 Rashmika Mandanna was spotted outside a cinema hall in Mumbai as she was heading to watch her Tamil debut film, Sulthan.

South beauty Rashmika Mandanna, who has bagged back to back two Bollywood films, was spotted today in Mumbai. The Dear Comrade actress was spotted outside a cinema hall in Mumbai as she was heading to watch her Tamil debut film, Sulthan. One can see in the photos, Rashmika Mandanna looks pretty as always as he sports a white oversized shirt tucked in half to her denim shorts. She teamed her summer-friendly look with a pair of white shoes. Known for her cheerful, positive attitude towards paps, Rashmika was all smiles and also chit-chatted with the photographers before making her way to the cinema hall.

Her Tamil debut film Sulthan alongside actor Karthi has released today, April 2. The film is getting mixed response from the audience and critics alike. Directed by Bakkiyaraj Kannan of Remo fame, the film also stars Napoleon, Lal, Yogi Babu and Ramachandra Raju in supporting roles. Sulthan has music scored by Yuvan Shankar Raja with the soundtrack composed by Vivek-Mervin. Since Rashmika Mandanna is in Mumbai for her second Bollywood project Goodbye, the actress decided to watch the film in Mumbai.

Take a look at her recent photos: Meanwhile, sharing her excitement of working with megastar Amitabh Bachchan in her second Hindi film Goodbye, Rashmika Mandanna took to Instagram and wrote, on Instagram, “this is how it’s ( hopefully) going! Finally working with the ONLY actor I have been waiting to work with … who I spent my childhood obsessing over @amitabhbachchan! Wat an honour sir/uncle! Welcoming new beginnings with #Goodbye.”