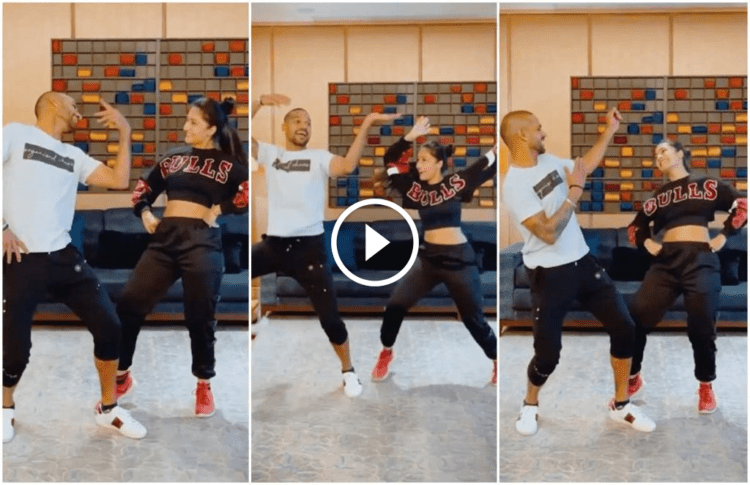 Team India cricketer Shikhar Dhawan, who is known for his famous dance moves, was recently spotted setting the stage on fire alongside ace leg-spinner Yuzvendra Chahal’s wife Dhanashree Verma. Incidentally, Dhawan along with Chahal and his wife, and a couple of other cricketers were spotted flying together from Pune to join their respective IPL teams ahead of IPL 2021 which starts from April 9.

Meanwhile, Shikhar Dhawan shares a very close bond with Yuzvendra Chahal and Dhanashree Verma. The opening batsman was one among the few Indian cricketers who had attended the wedding festivities and the reception thrown by the adorable couple when they tied the knot in December 2020. The trio reconnected during the limited-overs series between India and England as Dhanashree was travelling with Chahal.

During their stay in the bio-bubble, Dhanashree Verma, who is a well-known dancer-choreographer collaborated with Shikhar Dhawan for a short dance video where the two can be seen shaking a leg on a Punjabi song, Boliyan, sung by Lehmber Hussainpuri. The video has gone viral on social media with likes and comments flooding in with every second.

“Hitting the dance floor with the super talented and fun @dhanashree9,” Dhawan wrote in caption while sharing the video.

Meanwhile, despite having a poor outing in the T20I series against England where India experimented with a couple of youngsters, Shikhar Dhawan bounced back in the 50-over format. The southpaw emerged as the third-highest run-getter in the series after Jonny Bairstow and KL Rahul with 169 runs under his belt from three games at an average of 56.33.

He will be next seen in action during the upcoming IPL 2021 where he will be representing Delhi Capitals. The Capitals, who will be led by Rishabh Pant will begin their campaign against Chennai Super Kings on April 10.