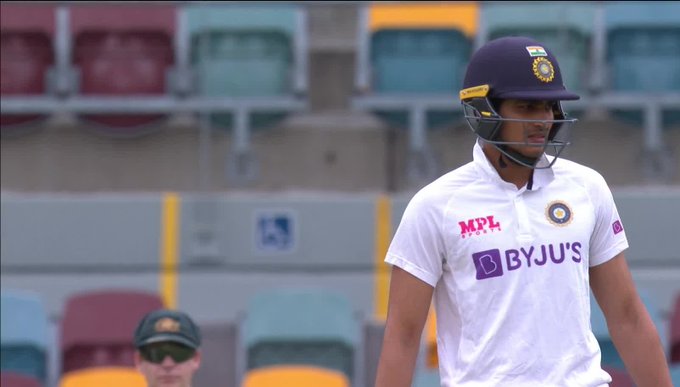 Shubman Gill hit three consecutive boundaries to Mitchell Starc as the Australian spearhead went for 20 runs off his over. Gill was finally dismissed for 91 but not before he made the Australian bowlers toil hard to get his wicket. He batted with an aggressive approach with India going for the win and challenging to threaten the rich history at The Gabba. Gill scored 91 off 146 balls hitting eight fours ad two sixes.

Shubman Gill first hit a six off Starc from the front foot and over square leg. The ball was bowled at nearly 145 clicks and the right-hander pulled him off with full pomp and authority.

His second hit was to the fence for a boundary. That shot also brought up the 100-run stand between Gill and Cheteshwar Pujara. The ball was short and Gill rolled his wrists over it and pulled it down in front of square for a four. It was also a no-ball by the might left-armer.

Gill then scored another boundary which was the result of a no-ball as it was a slash and Gill controlled it well. It was a ball short outside the off-stump and Gill took full advantage of it.

Gill then ran a single off the fourth delivery of the over after which Pujara hit a boundary of Starc courtesy an upper-cut. It was a 20-run over which provided momentum to the Indian chase.

Gill goes long – and sends the ball over the rope and down the race!

Soon after Starc’s over was done, Australian skipper Tim Paine called for a bowling change and brought Nathan Lyon back into the attack. The off-spinner dismissed Gill on 91 to bag his 398th Test wicket. The wily off-spinner is now two short of the magical 400-mark.

Meanwhile, Indian skipper Ajinkya Rahane joined Pujara at the fall of Gill’s wicket. India’s win for the elusive win at The Gabba is still on with a few more than 40 overs still to go and India needing 180 more runs to win.