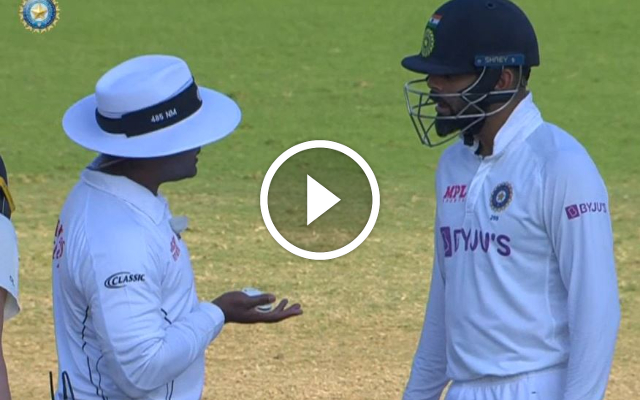 It was day 3 into the 2nd Test and we’ve had another apparent controversy surrounding the umpiring in the ongoing Test. First up on day 1, 3rd umpire Anil Chaudhary ruled Ajinkya Rahane not out on England’s referral despite having a clear spike on ultra-edge.

Also Read: ‘I Would Love To Credit Vikram Rathour’ – Ravichandran Ashwin Reacts After Scoring An All Important Hundred

Now on day 3, England’s skipper Joe Root survived an absolutely plumb LBW appeal all courtesy of the DRS rule for umpire’s call. It was during the last few minutes before stumps were to be called when Axar Patel trapped Joe Root on the back foot, with Nitin Menon initially turning down India‘s caught behind appeal, the hosts decided to challenge the umpire’s decision.

At first, the third umpire Anil Chaudhary first checked ultra-edge for a caught behind appeal but with Ultra edge showing a flat line as the ball passes the bat, he further went up for ball tracking, which clearly showed the ball hitting the stumps except the impact being fractionally outside which led to the 3rd umpire sticking to the on-field call. This resulted in quite a bit of stir in the Indian camp as Virat Kohli was seen having an animated chat regarding the review with the on-field umpire Nitin Menon.

This dissent by Virat Kohli towards Nitin Menon might just prove costly for the Indian skipper as he risks getting banned for the next Test against England after having already copped up two demerits points in the past.

So it’s not out for Root but out for Kohli? pic.twitter.com/MTpCcHaZGF