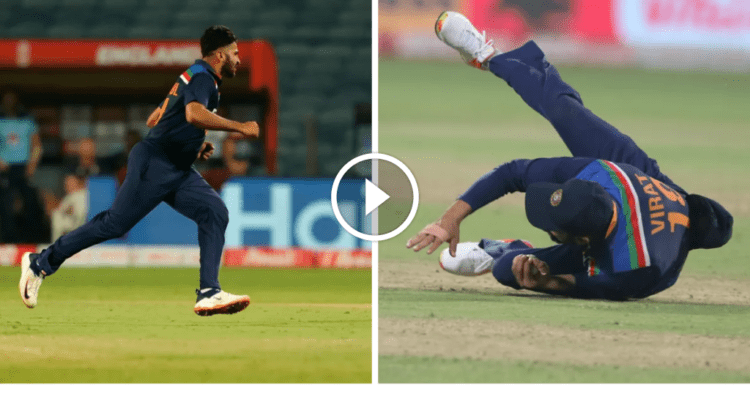 Virat Kohli grabbed a sensational one-handed catch to send Adil Rashid to the pavilion in the 3rd ODI in Pune. The partnership between Sam Curran and Adil Rashid was frustrating India and it needed something special to end their partnership. The team India captain did just that as he a difficult catch look ridiculously easy. The batsman Rashid played the ball touch early and the ball looped towards Kohli who was fielding at short extra cover.

Kohli’s eyes lit up when he saw the ball coming towards him and jumped to his left to complete the catch. The Indian captain acrobatically plucked his left hand out and snaffled the catch. After completing the catch even Kohli had a surprised look on his face as he pulled off a stunning one-handed catch which India desperately needed. The entire team rushed towards the Indian captain to celebrate his amazing fielding effort that saw the back of Adil Rashid who was batting well.

In the entire run chase, Kohli was sensing an opportunity to make a contribution in the field after he failed with the bat. His time finally came and didn’t miss when Rashid gave him half a chance to take a catch at short extra cover. Rashid made 19 from 22 balls and his knock was brought to an end by a spectacular catch by Virat Kohli.

What a catch by King Kohli @imVkohli 😍🔥 pic.twitter.com/kOflSt4Okm

Meanwhile, India is on the verge of winning the ODI series by 2-1. The hosts require just 2 wickets to win the final ODI whereas England needs further 61 runs from 48 deliveries. Shardul Thakur has once again shown his wicket-taking ability and has provided India with wickets at crucial stages in the final ODI.