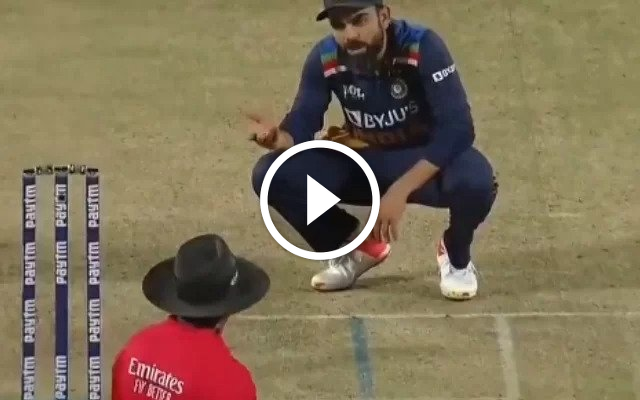 The ongoing series between India and England have come under the scanner for a couple of umpiring howlers. On Friday, Team India skipper Virat Kohli was seen miffed after third umpire ruled out a run out off Ben Stokes despite replays clearly showing that the bat has not crossed the line in the 2nd ODI at the Maharashtra Cricket Association Stadium in Pune.

The incident took place after the end of the 26th over of England’s innings when Ben Stokes survived a close run-out call. Replays were inconclusive for the third umpire to come to a decision and he eventually ruled Stokes not-out. Stokes eventually took the game home playing a 50-ball 99-run knock as England chased down 337 runs in just 43.3 deliveries with six wickets to spare.

Soon after the end of the over, the animated Virat Kohli ran to the crease and tried to analyse the decision while trying to discuss with the umpire, Nitin Menon. However, the latter ignored him clearly showing that he wasn’t interested in it. Though Menon told something to him later and the 32-year-old had to walk away for the play to start. Meanwhile, this is not the first time Virat Kohli has had an argument with the umpire in the ongoing tour.

Chasing a mammoth total of 337 runs, Bairstow kicked on and found an able ally in Ben Stokes, who was determined to not let the tempo fall like the last game after Jason Roy’s dismissal. The southpaw did have a moment of luck when a debatable run-out call went in his favor. But that was probably the only blemish he had, and the overs 31-35 were probably the most destructive hitting that you would ever see. A mind-boggling 87 runs came between the 31st and 35th over which took the game from India.