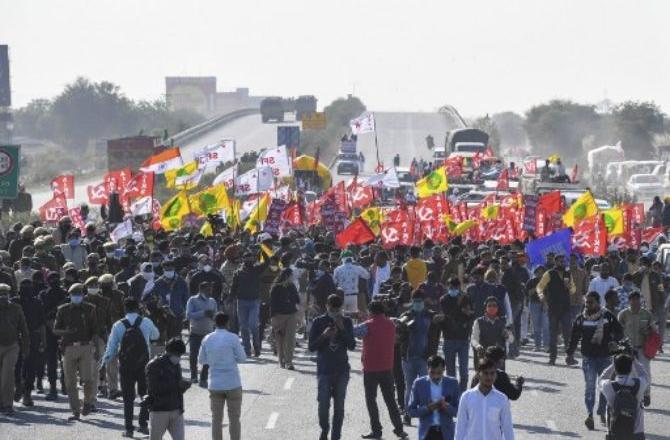 The Haryana Police on Thursday used water cannons and tear gas as farmers on tractor-trailers broke through barricades at the Shahjahanpur border with Rajasthan, trying to push towards the national capital.

While farmers on around 25 tractor-trailers pushed past the Haryana Police barriers, others stayed behind on the Rajasthan side of the Shahjahanpur-Rewari border, police said.

Farmers have been on a dharna at the site, blocking the road for several days in protest over the three new agri-marketing laws enacted at the Centre.

Farmer leaders at the site made clear that the protesters who forced their way into Haryana did not have their consent.

Kisan Mahapanchayat president Rampal Jat said the agitation was going on peacefully but some of the farmers forcibly entered Hayaran, which was not expected of them.

Haryana Police officials said a group of farmers, mostly youths, broke through the barricades set up by them in a bid to move towards Delhi.

The Haryana Police tried to stop them using a water cannon and tear gas even as their leaders urged them not go towards the national capital, they said.

Police said the group broke through the barricades with their tractors and a few of them managed to enter the state’s territory though they were stopped after some distance.

“There were some young elements who came with tractors and broke through the barricades. We tried to stop them and gently persuade them. However, they were very aggressive and turned violent. They were not even listening to farmer leaders,” Rewari Superintendent of Police Abhishek Jorwal told PTI over the phone.

Another police officer said the group became violent and at least one of them tried to drive his tractor in a very reckless manner, endangering lives of police personnel and some others who tried to stop it.

He said there were nearly 25 tractors, which broke the police barricades at Shahjahanpur.

Meanwhile, farmer leaders at Shahjahanpur called for peace in the agitation.

“We are sitting here peacefully and asking our members not to resort to violence,” Kisan Mahapanchayat president Rampal Jat said.

“We have sent some of our members to talk to those who entered Haryana to convince them to return,” Jat added.

Nagaur MP Hanuman Beniwal said it was done by some “overexcited youths”.

“Delhi march is not that important because we want to get the issue resolved through dialogue with the government,” he said.

A large number of farmers from Rajasthan, Haryana and some other places have been protesting on the Jaipur-Delhi highway for past over a fortnight.

They have been sitting at the Rajasthan-Haryana border point since police stopped them from proceeding towards Delhi as part of their “Delhi Chalo” march against the new farm laws.