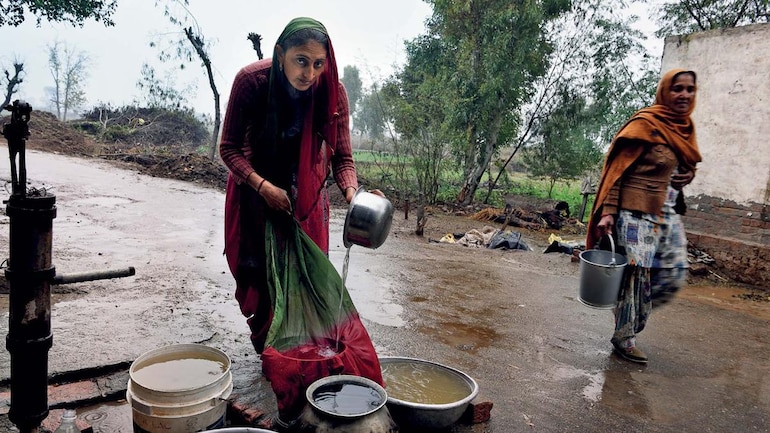 The damage, A woman in Punjab’s Fazilka district collecting polluted water from a handpump for domestic use

Punjab is currently facing three daunting problems: i) polluted canals and rivers; ii) depleting groundwater; and iii) polluted groundwater. The three problems are interlinked, but according to Umendra Dutt, director, Kheti Virasat Manch, an NGO promoting organic farming in Punjab, while the water at the surface is a big challenge, what is happening to the groundwater is a bigger crisis. The groundwater level is depleting at the rate of 49 cm every

year in the state and groundwater extraction is 165 per cent of the naturally-available recharge. The biggest culprit is the paddy crop that is grown in 22 districts of the state. Studies done by the Ludhiana-based Punjab Agriculture University (PAU) show that every kilogram of paddy requires roughly 5,000 liters of water. PAU’s studies also highlight the fact that Punjab consumes fertilisers at 190.1 kg per hectare, much higher than the national average of 88.2 kg. Apart from paddy, wheat (rabi crop) requires heavy doses of fertilisers. The damage done to groundwater due to heavy usage of fertilisers is severe.

“Farm habits don’t change overnight,” says Sarvjit Singh, principal secretary, water resources, Punjab. “Work is going on both at the policy level, as well as at the ground level to move farmers away from paddy”. The state, says Singh, has been working with Israel’s national water company Mekorot, to formulate a water conservation and management master plan. Israel recycles over 80 per cent of its waste water. Punjab, which recycles less than 10 per cent, has a long way to go to achieve that. Mekorot is expected to study the state’s water usage patterns and provide a solution to conserve, recycle as well as optimise usage.