Home General ‘We Are Struggling’: A Stark Christmas For America’s Jobless

‘We Are Struggling’: A Stark Christmas For America’s Jobless 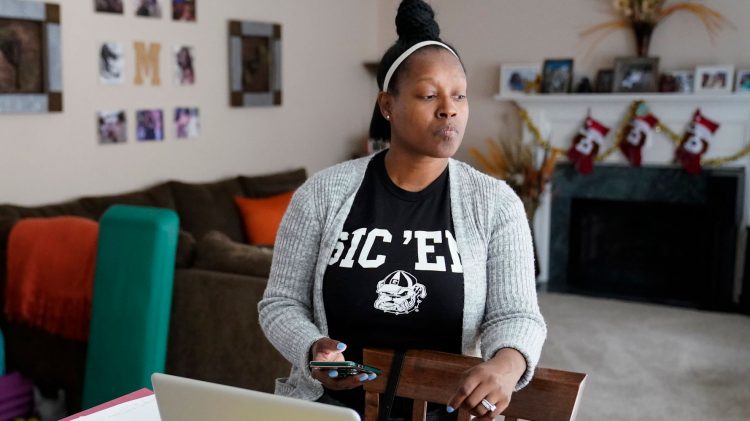 This year? They’ll stick with tuna fish and crackers, among the few items she can afford at the supermarket.

“We’re not really doing Christmas — I guess you can say it that way,” said Matthews, who lives in Suwanee, Georgia. “We are struggling. We are tired, and all I have is my faith.”

Like nearly 10 million other Americans, Matthews has been jobless since the viral pandemic ripped through the U.S. economy in March, triggering a devastating recession and widespread unemployment. Now, many months later, they face a holiday season they hardly could have foreseen a year ago: Too little money to buy gifts, cook large festive meals or pay all their bills.

Nearly 8 million people have sunk into poverty since June after having spent $1,200 checks that the government gave most Americans in the spring and a $600-a-week supplemental jobless benefit expired in July, according to research by Bruce Meyer at the University of Chicago and two other colleagues. And finding a job is getting even harder: Hiring in November slowed for a fifth straight month, with U.S. employers adding the fewest jobs since April.

Some relief may — potentially — be on the way. This week, Congress approved a $900 billion pandemic rescue package that includes a $300-a-week unemployment benefit, cash payments of up to $600 for most individuals, and a renewal of extended jobless aid programs that are about to expire. On Tuesday night, though, President Donald Trump injected doubts about that urgently needed federal aid by attacking the rescue package as inadequate and suggesting that he might not sign it into law.

Help, in the meantime, can’t come soon enough for Matthews. With her bank balance now negative, she worries that her account could be closed if she doesn’t receive financial aid soon.

Matthews, 41, has been struggling with her finances since she had to shut down her wedding business in March when ceremonies were canceled and any need for the centerpieces and flower arrangements she made suddenly evaporated. Matthews was denied unemployment aid by Georgia’s labor department. She doesn’t understand why and is appealing the decision. But the process is so slow that she’s waited months just to get a hearing.

Despite being a registered nurse, Matthews has been unable to land a job. She can work only late hours because she often needs to help her 6-year-old daughter, who must do virtual learning at home when virus cases spike at her school.

Matthews’ car was repossessed after she couldn’t keep up with payments. Most of what her husband earns goes to a $1,600 mortgage on their home. That leaves them with about $200 a month for groceries, utilities, and a $50 internet bill — a necessity for her daughter’s schoolwork.

Matthews hopes that a relative can step in and buy a Christmas gift for her daughter.

“We want to be able to have food, water, heat,” she said. “Those are the things that we care about.”

Charities say they have been overwhelmed with requests for help, a sign many are in deep financial distress. The United Way expects the number of calls to the 211 hotline it funds to double from last year to 20 million calls, mostly from people needing help paying rent or electricity bills. Feeding America says many of the people showing up at food banks are first-timers.

Out of desperation, Sheyontay Molton turned to Twitter for help after a series of events left her with no money to buy gifts for her four children.

Her children’s father lost his job this year. Molton, who is 28 and lives in San Antonio, Texas, had to temporarily stop working as a delivery driver for DoorDash after falling debris from a truck severely damaged her car in October. She used part of her rent money to repair it, leaving her behind on bills.

Having noticed on Twitter that social media influencers and celebrities were providing cash to some needy people, Molton created an account and tweeted about her situation. Someone sent her $200 through an app — money that she plans to use for groceries. Another couple on Twitter asked her to create an Amazon Wishlist and then bought her kids a doll, cars, and other toys for Christmas.

Without the donations, Molton had planned to tell her young kids that Santa Claus couldn’t come because he was taking extra coronavirus precautions.

“Silly, I know,” she said, But “it would have bought me more time.”

The struggles of low-income workers and the unemployed are contributing to a weak holiday shopping season that will likely drag on the overall economy. Retail sales fell 1.1% in November, a month that is typically strong as gift-buying gets underway. Some economists expect retail sales to decline again this month, particularly as governments impose more business restrictions and rising coronavirus cases keep consumers away from stores and restaurants.

A scaled-back holiday is what Summer Kluytman has been envisioning. She had to tell her two teenage sons not to expect the kinds of Christmas gifts they’ve typically received in the past, like the $400 Oculus virtual reality headset that was under the tree last year.

Having lost two art teaching jobs, Kluytman had to go on food stamps to help pay for groceries. The salary of her husband, who works for a cable company, goes toward the rent for their home in St. Petersburg, Florida.

Kluytman is spending $100 on each son this Christmas for hoodies and other clothing, down from the $500 she spent on each last year. She plans to hold movie nights, where they’ll gather in the living room to catch a flick.

“I think that they’re cool with us spending time together as opposed to a bunch of stuff under the tree,” she said. “But it does break my heart a little bit.”