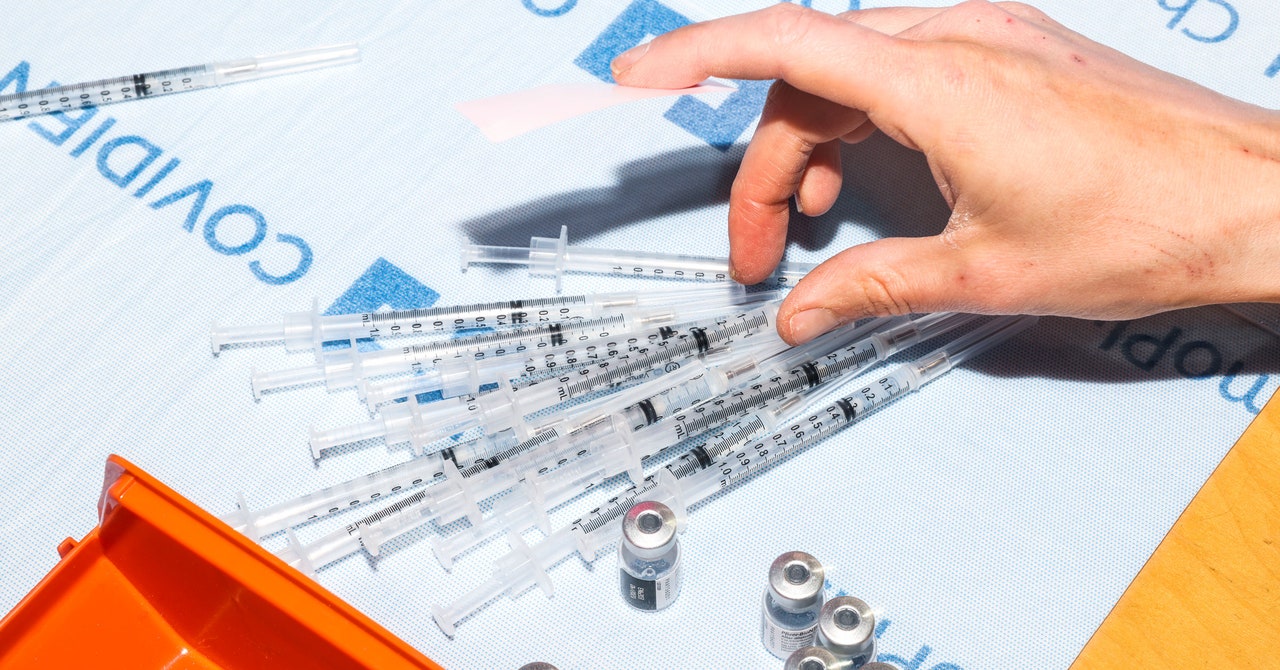 SARS-CoV-2 might cause its deadliest damage in the lungs, heart, and blood vessels. But its first stop in the human body is usually the nose, because that’s where inhaled viral particles first encounter cells they can invade and hijack in order to make copies of themselves. From there, the swarm of new viruses can expand into other organs—if the immune system doesn’t shut them down. And it’s from the nose that infected people can send out new clouds of contagion.

So in order for a vaccine to block transmission completely, it would have to recruit a cast of SARS-CoV-2-targeted antibodies and immune cells specifically to patrol the nasal passages, where they could glom onto any coronaviruses just after they get inhaled, and before they start their self-replication spree. This is how the nasal spray versions of flu vaccines work. But that’s just not what Pfizer or Moderna’s shots were designed to do. They were designed to create a sparser crew of wider-roaming immune defenders that can jump-start a bigger response wherever they encounter the virus, giving an infected person a better chance of beating back full-blown symptoms. “The goal of these vaccines has always been to prevent people getting hospitalized and dying, because that has the biggest public health impact,” says Talaat.

RELATED:  Mini Giraffes Spotted In Africa For The First Time Ever

The good news about the Israeli and UK studies, even with their methodological flaws regarding transmission, Talaat says, is that they show that out in the real world, away from the controlled parameters of a clinical trial, the vaccines are working fabulously at preventing people from getting seriously ill. In the leaked Israeli report, the vaccines led to a 95 percent drop in hospitalizations and 92 percent dip in deaths. And newer, better-vetted data is already starting to back that up.

A study published Wednesday in the New England Journal of Medicine that analyzed 600,000 pairs of vaccinated and unvaccinated Israeli individuals found that two doses of the Pfizer’s shot was 92 percent protective against severe disease and 87 percent effective at preventing hospitalization. Though the study did not have data on deaths following the second dose, just a single shot lowered death rates by 72 percent. So from a public health standpoint, that makes the question of whether or not the Pfizer vaccine, or any other, stops viral spread really a secondary concern, says Talaat. “If you vaccinate enough people, then you don’t need a vaccine that stops carriage in the nose and potential transmission,” she says.

But that number does matter for answering questions like these: Is it safe to eat inside a restaurant? Or get on an airplane? Or hug your grandkids?

“This is exactly the type of gray area where reasonable people might reasonably arrive at different answers,” says Halpern. “It all comes down to the fact that we don’t all have the same risk tolerance.”

Talaat’s version of this calculus involves navigating family get-togethers with her parents (vaccinated) and her siblings (unvaccinated). Since she herself is vaccinated, Talaat still wears a mask when she’s visiting her siblings. And she’ll continue to do so until they get their shots. But she feels more relaxed around her parents. “If you are in a household or pod with someone who’s not vaccinated, you should still be as careful as you can to prevent potential transmission, especially if that person is high-risk,” she says.

The Hindu Explains | What has the WHO team’s field visit to...

Where Is The Moon During The Day? How, When And Where You...