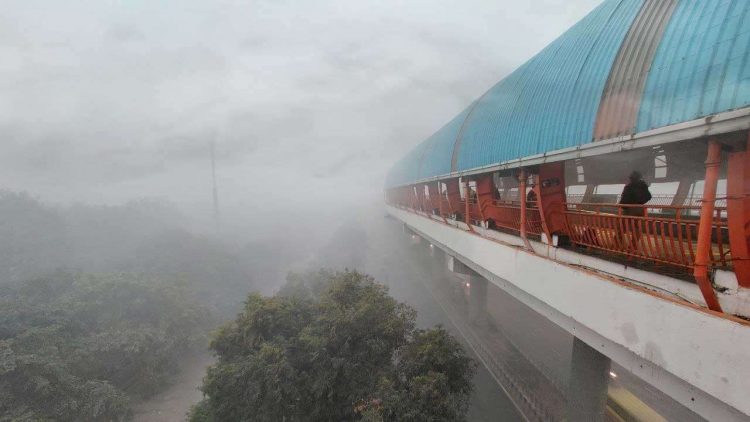 A thick layer of fog engulfed parts of the national capital on Sunday including Rajghat and Punjabi Bagh. According to the India Meteorological Department (IMD), under the influence of the approaching Western Disturbance, scattered to fairly widespread rainfall/snowfall is very likely over Jammu, Kashmir, Ladakh, Gilgit, Baltistan and Muzaffarabad.

Isolated to scattered rainfall/snowfall over Himachal Pradesh, Uttarakhand and isolated rain/thundershowers over northern parts of Punjab, Haryana and Chandigarh on December 27-28, 2020.

Cold wave to severe cold wave conditions are likely to re-establish over Punjab, Haryana, Chandigarh and Delhi, Rajasthan and West Uttar Pradesh from December 29, said IMD in its bulletin today. It is likely to increase spatial coverage during the subsequent two days.

The air quality in the national capital remained in the ‘very poor’ category for the second consecutive day on Sunday, according to the Ministry of Earth Science’s air quality monitor, System of Air Quality and Weather Forecasting And Research (SAFAR).

At 6 am Sunday, the city recorded an AQI of 334, with concentrations of the particulate matter (PM) with a diameter of 10 and 2.5 microns standing at 288 (‘poor’ category) and 164 (‘very poor’ category) respectively, Centre-run SAFAR stated.

The overall AQI of Delhi is expected to improve on December 28 and 29 but will remain in the ‘very poor’ zone.

Northern parts of Saurashtra and Kutch and West Madhya Pradesh also likely to experience cold wave conditions on these days.

Cold Day conditions are likely over Punjab, Haryana, Chandigarh, and Delhi on December 28 and 29 and over North Rajasthan on December 29 and 30, 2020.

In its latest impact-based advisory, the IMD said there is an increased likelihood of various illnesses like flu, running nose or nosebleed which usually set in or get aggravated due to prolonged exposure to cold. “Don’t drink alcohol. It reduces your body temperature,” the advisory read.

“Get indoors. Eat vitamin-C-rich fruits and moisturize your skin regularly to counter the effects of severe cold,” it said.